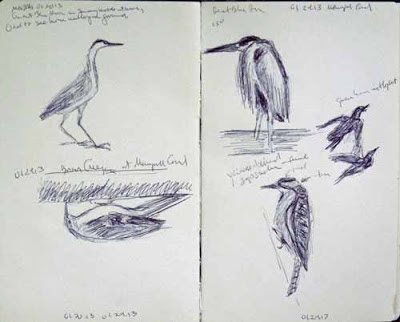 Now that the weather has finally turned cold, that is lows in the low teens, I've wanted to see what birds are still about, especially at the Manayunk Canal. Yesterday I finally made it over for a look.

95% frozen. Perhaps more. That didn't bode well for the Green Heron that has been here throughout December and early  January. I've always read that birds like Belted Kingfishers will stick around until their fishing water freezes over. Well yesterday it had.

The Manayunk Canal actually starts about 1.5 miles from where I start along the Schuylkill River, a large river that doesn't often fully freeze. So there will almost always be some moving water nearby. It's just that Green Herons I don't believe generally frequent such large rivers. I could be wrong on this.

As I  walked along even the Ring-billled Gulls  and Canada Geese were frozen out. I saw five Ring-billled Gulls in the air as opposed to the  50+ I generally  see loafing along or floating in the water. Same thing with the Canada Geese. I only  saw one, at the very spot where the canal water joined the Schuylkill until much later when about 70 flew overhead.

The few pockets of water that weren't frozen were next to outlets of running water, I assume storm sewers from the city  of Philadelphia. There were about 10 of them I'd guess. That's where I found two Belted Kingfishers and a few other songbirds. Two Great Blue Herons inhabited the two slightly larger areas of moving water. But even they looked mighty cold. I don't think  it was above 20 during my 90 minute walk.

Finally as I walked back along the same trail I saw some movement near the very last small outlet. Sure enough the Green Heron was still here. And sure enough he's just as easily spooked as he used to be! As soon as I moved a step forward to try to get a better view for skeching he flew.

Above you  see my field sketches from yesterday. On the right hand page there  is one attempt to put down what I saw in his brief flight before he disappeared. Beneath it a second attempt after looking at some guides at home. Also on the right page are one of the Great Blues as well as a Yellow-bellied Sapsucker. On the left page is a Brown Creeper, creeping along upside down as well as a Great Blue seen a few days ago.

Both the creeper and sapsucker have been slightly modified after looking at guides and photos once I got home. This is greatly  frowned upon by many wildlife artists and probably with good  reason. My motivation in doing so is to correct what I had wrong, or to supplement what I didn't remember. But it's probably  best to just live with what is wrong and try to remember what I missed for future drawings.

In the two or three years that I've done field sketching with any regularity I've found that there is a very slow but nonetheless noticeable accumulation of knowledge and skills. There's also a greater sense of adventurousness. Not that long ago I never would have attempted a sketch of a fleeing Green Heron, one that I'd only seen for a split  second. That is not enough time to have a conscious thought I don't think. But if I try to sketch it I do find that I do have some sort of visual image in my mind. This doesn't capture it. But it is a step. At one time I never would have a tried an upside down bird, like the creeper. But I've done a number over the years and each time it  gets easier. Before you  know it I'll have one that looks right!!

As I think I've mentioned before I've become a  big believer in field sketchin and that has been reinforced most recently by the book  Bob Kuhn: Drawing on Instinct. I'd advise anyone to try it.