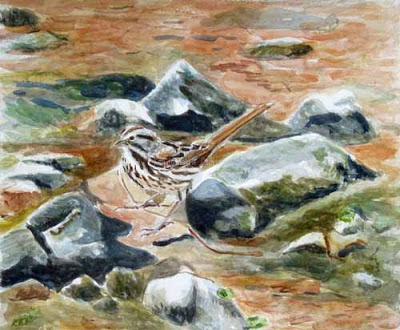 I had a couple of motivations in doing this watercolor. The first was to try to solidify my knowledge of sparrows. When I see them as I have Chipping and White-throated Sparrows recently I try to memorize their features and then get that down in sketches(though as I mentioned in last post I'm rarely able to do any sketching with Chipping Sparrows). When I get home though and look at the sketches I often realize that something's missing or wrong. So then there's the temptation to work from a photo I've taken and do a new work that fixes the problem. I'm particularly interested in doing it in paint, mainly because it gives me a chance to add color.

The other motivation is my unending attempt to master watercolor. I love the sense of light and brighntess that are in watercolors that don't follow the paint by number method and actually let the watercolor breathe. But I'm rarely satisfied with the results. Or perhaps I'm satisfied but I'm not excited.

So as with field sketching or just about anything else I realize that I just need to try more. I think it's a given that you don't have success without failure. And you won't even fail if you're so scared of failure that you don't even try. My guess is that the most successful artists are the ones who just keep at it.

So  a couple of days ago I started this 11x14 watercolor on a Strathmore Field Sketch pad sheet. It's larger than I normally work and the reason for that is that I think it may make me less tentative. As you can probably see I also spent a lot of time sketching the bird and not very much on the stream, rocks/pebbles and leaf. The bird itself is the ubiquitous Song Sparrow. I was going through my photos actually looking for a photo of a White-throated Sparrow to complement the sketches I'd done earlier in the week. But when I came across this handsome bird, standing so alertlyon an oak leaf in Papermill Run at Morris Arboretum I had to stop and give him a try.

Non-birders, I think, see all the sparrows as just little brown birds. But when you look close at their varied caps, spots, strips, shades of gray, splotches of color, and behaviors, they really are an interesting group of birds. If you can see them before they dart into the underbrush.

The song sparrow is one of my favorites, perhaps because it is relatively common here (although much less so in winter) and I like its song :)

Nice painting, displaying its perkiness. I like the rocks too!

Very striking painting - great drawing and composition. I've been enjoying your comments on and sketches of sparrows. I'll have to keep a look out for chippies, as I hadn't expected to see them yet.

I think not just non-birders see only little brown disappearing birds!! It takes awhile even for birders to find them, really look at them, and appreciate them.

Some of the few sparrows that do seem to actually let you look at them are the Song and the White-throated. Yesterday I heard a Song Sparrow singing and my wife said she'd heard one a week or so earlier.

Hard to believe that spring is on its way!

P.S. Glad you like the rocks. The more I do naturalistic art the more I realize that you need to be able to render rocks, vegetation, water in some form or another, even if abstract, if you want to portray the whole world of birds. A lifelong learning experience!

Thanks Nanina. Glad you enjoyed my thoughts and sketches on sparrows, an underappreciated type of bird I think.

I'm really not sure about chippies. They are not supposed to be here but in fact I'm pretty confident that they've never left this particular area. My guess is that they'll still arrive in your area at their normal time but who knows for sure anymore!!

Watercolors, like sparrows, are subtle and a little difficult but rewarding once you dive in. Beautiful new work, Ken!

Hi Debby, nice to hear from you, and also nice to see your blog so lively again.

I think you're right about sparrows and watercolor, both beautiful but subtle. I really think oil or acrylic are more natural media for me, and ones I'm much more familiar with. But once you get bitten by the watercolor bug it's hard to give it up!