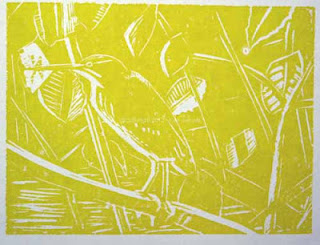 In retrospect I almost always like my reduction linocuts, the ones where I print the block in one color, cut away more lino and print in another color, and so on to the point where there's very little lino left by the time I'm done.

I say in retrospect because sometimes the actual time spent developing the print can have more than its share of problems. I don't do reduction linocuts to prove any technical  mastery. More likely they show the opposite. Instead I do them because I like the end result, in particular the mismatched overlaps of color that give the print a jangly quality, reminiscent in some ways to the jazzy work of Stuart Davis, one of my abstract heros, or to Mondrian in Broadway Boogie-Woogie. I'm not trying to put myself in their company, always a danger when mentioning well known artists, but to help explain my  motiivation.

I think  this jangly, jazzy feel is as appealing to some people as it is bothersome to others. I've sometimes theorized that this is due to a more urban versus more rural background but who really knows? I  grew up a half block from farmland, lived in the large cities of Chicago, San Francisco and Philadelphia, where I still live, but more and more find my interest rural rather than urban.

In spite of that my taste is still more for the jazzy. Perhaps it will pass!

In any  case I've decided that I want to do more reduction linocuts. When I do them I often tend to start off with a lighter color, then proceed to darker ones. But this is a bit like flying blind. It's really hard to even see the print when it's yellow on white. That's what you  see at top. And the photo shows a stronger contrast than you  can see in real life. That's where the 'flying blind' in title of post somes from.

But as with watercolor it's the whites  that will help to make the print sing.  The only time I have to create them is when I make the first cut and print the first color. After that any future cuts will show the last color printed, not the white of the paper. After the first color is printed all future printing happens on top of the first prints. So when I carve out more lino and print in a new color what show through is not the white of the paper but the colors already printed.

There are aome lino printers I suspect who think  out in advance which color will go where and when, more or less. But I can't work that way. For me instead I need to print something and then respond to it, what I called process in the last post. This is part of the appeal of the lino process, especially reduction lino. The one big problem is that you can bet I'll find I want some more white areas as the print develops. And it will be too late by then to retrieve them. My only chance is on this first color. 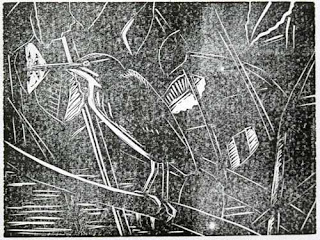 Because of that I also printed a slightly earlier proof of this in black ink. Black will most likely be the last color I use in the actual print. But I've used in here, printed on copier paper, just to allow me to see the contrast between ink and paper a bit better.

I think this explains pretty well the phrase flying blind. But what about with obstacles, the last part of the title? Well there are a number of  them. For one I can't order white ink in the brand I use because there's been a production problem. It should have shipped a week ago but it's still not ready. I thought I had some old white left and could get by with that for proofing. But what I had was just a tiny bit that included more specks of dry paint than of wet paint. That  meant that when I used it  I  just got dry flakes of paint all over my print, my inking slab and other tools. The same thing happened with my old transparent base which I hoped to use to make the initial yellow transparent. Eventually  I tossed those proofs and restarted with a brand new jar of yellow, free of dreid paint. But it's the lack of white which I suspect will  be the real problem. I'm sure that as thsi print develops I'll want to use a tint or a gray version of a color. But I won't have the requisitie white to do so. So that will be an obstacle, but also  might possibly result in a pleasant surprise.

I'm rarely a technical person when it comes to art. But with printing it can't be avoided completely. So please excuse this brief foray into technical problems. If the print is successful these problems will just add to the success.

I assume it's obvious what t he subject is but in case it's not: this is based  on a watercolor I did this summer of a Green Heron holding a Twelve-spotted Skimmer in his bill, ready to  eat it.
Posted by Ken Januski at 9:47 AM