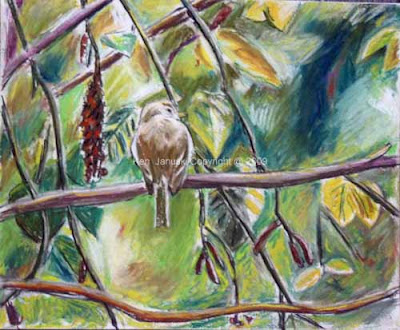 A funny thing happened as I worked on this drawing, now in its third or fourth day I think. I realized that I was spending a lot of time trying to retrieve what I'd lost from the last version of this drawing that I posted.

I won't rattle on forever about that but it does seem appropriate for this my 100th post. When I started this blog, originally a web site, I thought I'd use it to write down bird sightings, thoughts on birds, nature and art, and maybe throw in a quick sketch or two. But as time went on I realized that my strongest interest by far was in developing my art and showing it here.

When I started this drawing I wanted to be somewhat improvisatory, as I've been through most of my artistic career. I had foregone improvisation to a large extent over the last three years as I took up birds as my subject. But something gnawed at me as I did so. I wanted to be true to the birds I saw but I wanted more artistic freedom.

I think I've finally gotten to the stage where I'm regaining that freedom. And one of the big parts of that freedom is the Freedom to Make Mistakes!

I think that may be what happened when I went back into this drawing to try to unify the background, so that it seemed more illusionistic and not so much just painterly markings with pastel. In doing that I think I lost some of the summery brightness that the drawing had on Sunday.

I hope that I've retrieved some of that. If not I think I have at least turned it into a finished drawing. And that is really what is important to me.

When I did abstract and non-objective work most drawings took days to finish. If they didn't then they at least took a full eight hour day. I was never satisified with what I did, at least not immediately. But generally after those days of work I was satisfied. I felt that I had a finished drawing. Paintings were the same but took weeks rather than days.

Most of my bird art has been done in much less time. Anyone who follows this blog knows that occasionally I still spend too long because I have ruined a good quick watercolor or two by overwork. That's undoubtedly true. But I think watercolor is a different type of medium. Most artists need to work quickly when using it. It just won't get better with continued work.

Pastels, charcoals and paintings are different however. It is possible to make them better with more work. It doesn't always work out, but even when it doesn't you generally learn something.

So that is really why this works seems appropriate for my 100th post. Whether it's better or worse than my drawing from Sunday I can't say right now. I'm too close to it. What's most important though is that I worked on it until I thought it was finished, really finished, like my old abstract works. Sometimes this is a painful process. But I think in the end it makes for better stronger work. And for happier artists!
Posted by Ken Januski at 9:30 AM

Happy 100th!
I've been comparing your pieces, side by side. I see the changes made and like what you've done to the shape on the right. Where in Sunday's the bird was front and center, now for my eye, I go to the wonderful abstraction shapes on the right and then as my eye works around, I say.......Ooo a cute little guy too! I do still love the warm greens in Sundays work and how the flycatcher feel so close to the viewer.

Think you're onto something with background abstractions :)

I do think the drawing improved in composition with more work. But I sure do miss the warm greens from Sunday. They were truer to what I saw. But no matter what I did, and I experimented for two days, I could just never get it back to as warm as it was on Sunday!

I wish I could get as involved with my watercolors without ruining them along the way! But practice, practice.

Cpngrats on your 100th post. It is interesting to see how the experience of blogging changes as you realize it is a medium in its own right.... Al

Did a quick stop at your blog and need to go back. It is always refreshing to see.

I really like the thoughts in this post, especially that the drawing can improve by continuing to work on it. I'm only now beginning to get it myself so it's nice to see it written down.

I'm happy to hear that my rambling thoughts have proved useful to someone!

Particularly in my recent work I've done more quick work and not as much developed work. I think both are valuable and rewarding. But some artists only seem to do one type. So if you do primarily quick work then it might make sense to keep at some of your work until you either like what you have or feel like you've learned something valuable. Or vice versa.

For myself I haven't done much developed work recently and so I suspect that's where I need to go over the next month or so. Not that I necessarily will.

But the most important thing: keep working!

I did take a quick look at your blog and see that you've done some quick work, like the PGA series. I love working from TV like this. It forces you to make decisions quickly. I'll have to stop by and take a longer look soon.