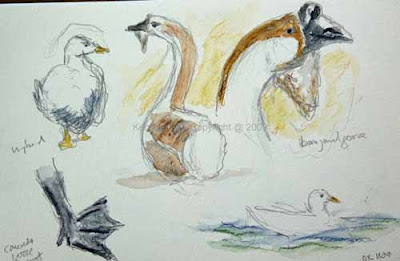 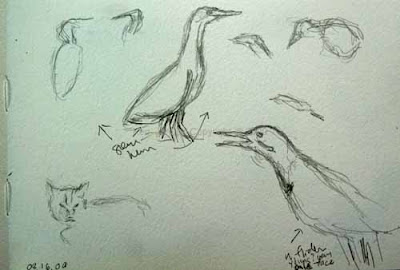 I've continued to do field sketches since I last posted, both at Valley Green, where ducks and geese are plentiful, and at Morris Arboretum, where I and my wife went this weekend. The most notable thing at Morris however was not the birds but the insects, specifically cicadas.

I'm not sure we've ever seen such an abundance of them. And I'm not sure the local birds had either. We had barely started birding when we saw a number of birds flycatching. Flycatchers, right? No, Warbling Vireos. More than that they looked like flycatchers who suddenly decided to make right turns in the middle of a dive. I'm not sure but I think they were going after the cicadas.

I thought about trying to take a photo of some of the closeup cicadas but it just didn't seem worth the effort to unpack the camera from the daypack. By the time I did the insects probably would have flown! They normally do, whether they're birds or insects. Possibly I should have tried a sketch.

We did manage to see a number of birds at Morris as well. The most interesting for sketching purposes were two Green Herons and one pale, probably immature Northern Flicker. I include a page with sketches of both. The heron has three legs because he shifted his pose while I was drawing him.

Two trips to Valley Green produced a couple of pages of ducks and geese. Interestingly the one hybrid goose, with knob on head and wattle on neck, is a Chinese Goose, not a Graylag/Barnyard Goose as I'd guessed. They're both domesticated geese and so aren't as usual in guidebooks. That coupled with all the hybrid ducks at Valley Green makes me want to write them all off as hybrids. But a passerby told me he thought the geese were Chinese Geese and he was right. They're actually very handsome. 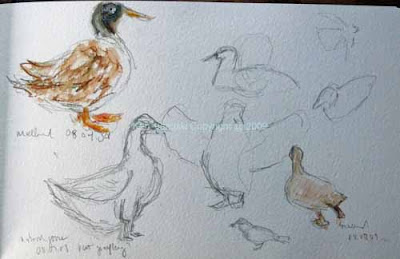 The Valley Green page above includes a duck I've shown previously. But the other birds on that page are new. I'm showing it particularly because of the Mallard with one leg raised in lower right. He wasn't just drying it off, or instigating a new dance craze. He was actually injured from what I could tell. He didn't want to put any weight on it.

I think he, as well as the Mallard in upper left of that page, show why I love drawing from life and why I'm happy to be devoting more time to it. This type of sketching can capture a unique moment in time. Some people don't see this and long for work of fine detail. But for others, and I think this includes most artists, there's nothing more satisfying than a quick sketch that seems to capture a moment, and gesture, in time.
Posted by Ken Januski at 9:22 AM

You've been having fun! Do love the Mallard and it's lower right friend :)

I'm just starting to get comfortable with working live. I've ordered a watercolor field box so soon I'll start doing my sketches in straight watercolor rather than watercolor pencil and waterbrush. I think this will be a good move, though one that will get off to a rocky start I'm sure.

But I'm getting used to rocky roads!!