Jimmy Nardello, Dinosaur to the Rescue 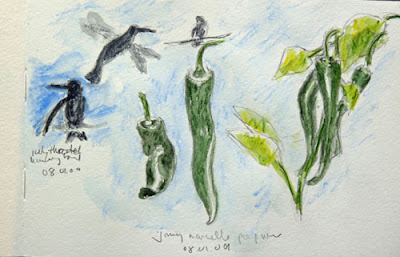 It was a sad day yesterday when I had to destroy about 30 tomato plants in our garden. They all suffered from late blight. I was first alerted to this problem by Ellen at The Spicebush Log a few weeks ago. That post led me to look at our tomatoes, all grown from seed, and including such heirloom varieties as Hillbilly Potato Leaf, Cherokee Purple and Green Zebra. I saw a few spots of yellow and brown on some leaves but I didn't think it was late blight. Yesterday an email from Johnnys Selected Seeds reminded its readers of the dangers of late blight. It also included the first link above, which shows many photos of late blight evidence on tomatoes

So I checked again. This time there was no doubt. Although I'd grown all plants from seed and so they couldn't have been contaminated by a commercial grower they had still gotten the disease. And that is the problem. Because it spreads through tiny spores which can travel great distances it's possible to get the disease from contaminated plants in other gardens. Once your plants have it you can also spread it to plants outside your yard. And you can get it in your soil so that it remains for years. Given all that I had no choice but to pull all the plants yesterday. Unless the farm which the runs the CSA to which we belong has escaped the blight we'll have very few tomatoes this summer.

But there was a bright spot. Growing plants from seed there are always some seedlings that just don't get planted due to lack of room in our small urban garden. Also as trees and shrubs in our yard and our neighbors have grown our yard has gotten more and more shady. So it's harder year by year to find room to plant all we'd like to. There is just too much shade to be good for most plants. With all the tomatoes I ripped out and put in plastic bags however a fair amount of new space opened up.

Most of the extra seedlings were the delicious Italian frying pepper Jimmy Nardello(see drawing at top) and so I'll be able to plant them rather than just see them wither away to nothing in their tiny seedling pots. Additionally a few basil seedlings will now have a home.

Each fall as the weather starts to cool I wish I had some kale, especially Lacinato Kale, also known as Dinosaur, and Tuscan Kale. But there was never room in the garden so I never planted a fall crop. The new space will allow me to do so. Additionally I'll plant some other crops thst will be delicious in the fall, especially choi and spinach. Many plants will survive some snow and cold so it's possible to have garden crops late into the year. Unfortunately one of my favorites, Green in Snow Mustard, no longer seems to be available.

In the drawing at top you'll also find a few bonus Ruby-throated Hummingbirds, drawn from life in our backyard. As you can probably tell they don't sit still for long. But still I try, and I do learn. See my next post, coming in next few minutes, for more information on this.
Posted by Ken Januski at 10:23 AM

So sorry to hear about the loss of your tomato plants. My farmer friends had to pull all of their field grown tomato plants, which was probably over 400 plants. So far, their tunnel grown tomatoes are okay and so far my plants seem free of late blight. We actually enjoyed an orange blossom tomato last night picked from a plant on our deck. I feel fortunate.

I like the Jimmy Nardello drawing. A cheery fellow.

If you are up this way, we would be happy to share a fresh tomato or two!

Yes I hated to take out all of the plants. I've never had to do that before! But I did salvage about 5 pounds of green tomatoes and bring them in. Two have already ripened so maybe we'll get a few.

But I've just put in an order for new kale seed so that and some choi will go in soon. In November I'll be happy that I did it!!