"A Pencil is One of the Best of Eyes" 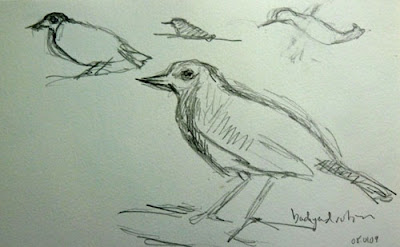 I ran across the title quote while reading 'Crow Planet, a new book by Lyanda Lynn Haupt, yesterday. It's from the 19th century scientist Louis Agassiz. His point was that in drawing what you see you actually are forced to see much better. You see details that you otherwise might miss. This sentiment has been stated many times by others, especially birders and bird artists. Only when you try to draw what you see do you realize that you might not have really seen so well in the past.

As I read this last night I thought of the trouble I'd had drawing the young robin above earlier in the evening. It was dusk and even though the robin was only 6-10 feet away I just couldn't see him well. What did his eyes look like? I knew that there was a sort of broken eye ring but I just couldn't see it. It was too dark. So I made a guess. But what I learned is that next time I'll take one very good look at the robin so that I understand his eye.

I've also had a similar problem with Ruby-throated Hummingbirds, also seen in the drawing at top, as well as in the top drawing of my last post. I've seen many times now the way that their torso forms almost an S shape when they're feeding. But the wings!! They move too fast to even see them. But worse, I can't even see where they attach to the body. If I knew that, which admittedly I could find by looking at photos or guide books, I could at least approximate them. So I'll continue to look differently and more intently as I see them in the backyard this year. Eventually I'll get a better understanding of them and be able to draw them better. One thing that I've noticed since posting is that I'm drawing the wings of an insect not a bird! I'm sure that they don't come to a point as they attach to the torso as they do in birds. My guess is that in the constant fluttering it 'seemed' to look more like the wings on an insect, e.g. dragonfly, than that of a bird. But I'd be very surprised if the wings aren't very much like other birds in actuality, even though in appearance that might not be the case.

But it is only in the drawing itself, when drawing from life that is, that you begin to realize how little you actually see and how much better you need to train your eyes.
Posted by Ken Januski at 11:20 AM