The Joy of Outdoors 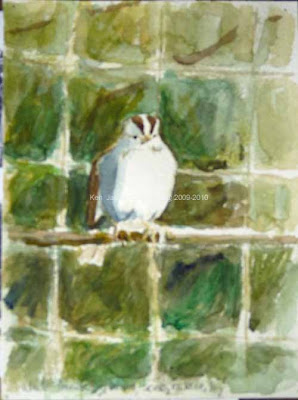 A couple things helped me to decide the title for this post: receiving a late Christmas present of 'Up River' by the artist Darren Woodhead, and spending five hours outside yesterday in 30 degree sunny weather counting birds for the Schuylkill Center Education Center Christmas Bird Count and the Philadelphia Mid-winter Bird Census.

Darren Woodhead's wonderful watercolors of the natural world are all done on site, outside. Some are done as the snow falls. But all show the joy of being outside. Additionally the five hours spent outside yesterday were terrific. It was in the 20s when we started and I had to get up about two hours earlier than normal, something I really hate to do! Still there is something I find completely enjoyable about being outside in winter, even more so when I'm counting birds for a useful purpose, such as the CBC and the mid-winter bird census.

It reminds me of what Ellen Snyder said recently in her Spicebush Blog: "Getting outdoors, bundled against the wind, is the only way to enjoy winter. "

Perhaps it's the fact that we tend to get outside less frequently in the cold of winter that makes it so enjoyable. Regardless of the cause it's an enjoyable experience. I think that Darren Woodhead's watercolors crystallize this. Nothing can match the experience of being outside and creating art outside. Now I say this as someone who doesn't do so all that often. You didn't see me doing watercolors in sub-freezing weather yesterday. But it's good to have some artists who do. The liveliness and vibrancy of their work reminds me of how much art can do and how much art has to offer.

The two create an experience of the natural world that I think is unmatched by anything else. As the natural world faces greater and greater threats, not to mention callous indifference, it's nice to see something that so brilliantly celebrates it. Europe lost much of its wilderness years ago. I can only hope that America will do better, especially as more and more reasons are constructed for its 'wise use', i.e. its destruction.

One of the small pleasures of yesterday and of most winters is rediscovering the beauty of the fairly commmon White-throated Sparrow. It's brilliantly white throat is a pleasure to see each winter, along with all it's other striking coloration. It's one of life's small pleasures.

The quick watercolor above is based on a photo I took yesterday. Perhaps one day later this winter I'll work up the nerve to try it live.
Posted by Ken Januski at 12:22 PM

Did Mr. Woodhead happen to mention how he managed to keep his water from freezing when he watercolors plein aire in sub-freezing temperatures? Not that I'm going to run outside and try it or anything, but just curious.

I liked what you said about the natural world and callous indifference. I would also say a total cluelessness as to how the natural world works. It brings back a memory from when I was working at a nature center and a school group came for a fall class. One little girl stomped up to me and very indignantly asked me why we hadn't raked up all the leaves on the ground. ...Actually looking back, I'm surprised she didn't mention a leaf blower.

Woodhead doesn't answer that question specifically, at least not in what I've read so far. He does say that he uses large tubes and puts them into a folding metal pallete. That may protect them a bit.

Here's something he does say that you might find interesting: 'The textures on the coats of the ewes comes from the instantly freezing washes of paint, at times making the laying down of any colour almost impossible. When paint freezes like this it tends to stain the paper surface, leaving a subtly distinctive mark.' I guess you could call this 'extreme painting.' But I think he just does it because he believes that he loses something in not working from life.

I wonder if it would be harder to explain this method of working to people or to explain why I find leaf-blowers one of the stupidest invention so far in human history. Though I guess the leaf-blowers are good at helping you to lose your hearing, assuming you have some perverse interest in that........

Why do all my neighbors have leaf-blowers? They really are the dumbest invention. Maybe that is why I enjoy my winter walks so much -- utter silence, except for chickadees and other birds chirping overhead as they hunt for insects. Despite the cold start to the morning, we went out for a walk at midday - gorgeous under blue sky, and quiet :)

We're agreed on that: the dumbest invention! And please excuse me for giving you the wrong last name in the original post. Something made me think I had it wrong but I didn't doublecheck. At least I had the link right!

I had been meaning to respond to that line from your blog for a few weeks now. I'm glad I got the chance to today. And I hope you're elbow has recovered from that nasty fall!

I do think you're right also about the quiet of winter walks. Last year when I did the bird census it was snowing out as well. That made it seem all the quieter and also seem as though I had that whole beautiful white world to myself. Rarely, especially in urban life, can you ever find that type of peace and quiet.

Great post Ken! I was re-reading journals from years ago and came upon an entry where I was counting the blessings for having dogs. I was living in western NY at the time and that meant having to go out 3 times a day - no matter the weather. I LOVED it!!!! I thanked the dogs for having to make this journey. I rediscovered all the joys of growing up on a farm and my youthful ways that had me outdoors in all weather.

Winter - when dressed for it - is beautiful. The silence, the stars brilliance at night, the tiny wakings of spring. Oh how I wish mankind, in general, could wake up to our earth's beauties.

I wish I knew how to do a link when leaving a comment..... one of the artists I follow is getting up in the wee hours when it's 17 degrees.... and creating watercolor paintings that resemble frost patterns on windows.
Look at www.watermarks-art.blogspot.com and it's the Jan 5th entry by Laureline entitled Northern Lights for the New Year.

Also great to see comments by Gabrielle and Ellen :)

Thanks for asking about my arm. It still hurts a bit, but is getting better! That was a wallop. I appreciate the link to spicebush log. I did not mind the last name error :) I love getting out in winter so that fall won't stop me, but painting in below freezing -- that must be a challenge. My hands get cold without gloves. Are they painting bare-handed?

I'm glad it struck a chord. I didn't grow up on a farm but it was on the outskirts of a fairly small town, with alfalfa fields 100 yards away. I walked about a half mile to school each day through open fields regardless of weather. My guess is that this early experience with the outdoors had a similar effect on me.

Anyway something did and I sure feel fortunate that it did. I guess that's one reason I'm happy to support nature centers, environmental organizations, etc. Hopefully they can help give that experience to people, particularly children, who didn't grow up with it.

Now that I'm older I appreciate my exposure to the classics as a youth. I think this stays with you. The same thing with nature. You may not appreciate it all that much as a youth but as you get older hopefully you are reminded of just how much it meant to you as a child and how valuable it is.