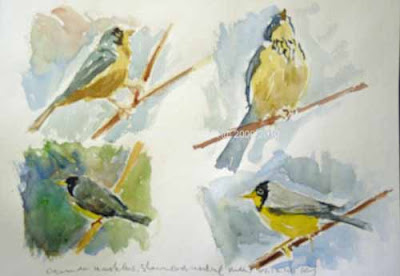 Following up on yesterday's quick watercolor of a Lark Sparrow I've done four very quick watercolors on the same page of various Canada Warblers seen at Shenandoah National Park in 2009.

The purpose in doing these quick watercolors is really to get used to watercolor as a shorthand for representation. There are some watercolorists who work in such a way that there isn't much shorthand involved. They really try to get every detail that they see either in real life or from a photo onto the paper. But I have no interest in this.

I have done it recently to some extent in some pencil drawings. But the purpose is really just to understand the structure of the bird more fully. When it comes to watercolor though its beauty to me is in its ability to use its own visual language to represent not just the subject, e.g. birds, but also the environment, e.g. light.

This is not the time for another lengthy post on why I pursue watercolor, even with all its difficulties. But I did just want to say that I the watercolors I most admire often seem to use it as language of visual shortcuts. Certain brushstrokes, abstract when seen just by themselves, become magically the wing of a warbler, when seen in the whole painting. That illusion is one of the marvels of painting I think, enjoyed by all as long as it doesn't become mannered and formulaic. So that is what I'm working on with these quick studies: learning the language of watercolor, learning to use broad brushmarks to indicate a bird all the while knowing that all sorts of detail is being deliberately destroyed as I do so.

I like these a lot, Ken. Great postures and volumn.

Thanks Pam. I really am enjoying doing these quick watercolors(all on your recommended Aquabee Super Deluxe paper). I think that they are forcing me to paint rather than color in drawings, which is a goal of mine.

Of course one of my favorite birds and you painted them in under 10 minutes. Wow. It takes me 10 minutes to think about what I am going to do next. I really should take up painting. Seems soothing.

These are really lovely, Ken. I also like your background choices. I am trying to loosen up my paintings, so I enjoy reading about your thought process as you paint.

I lived in Philly for a while and I remember finding a poor Canada warbler dead near Rittenhouse Square. Probably it was aiming for the park and flew into a building. It was sad, but I was also filled with wonder at being able to observe it so closely. (Of course I didn't have any sketching materials with me!)

And thanks for the further info about painting outside in freezing conditions. Fascinating, but as I said before, probably not something I'm going to try.

Well I wouldn't make much of the 10 minutes:-) I was just trying to force myself to work quickly so that I didn't think about trying to get all of the detail that I know is there.

For me watercolor works best as a quick medium. You just put down your brush, make a mark, and hope that it looks good. This is very hard for me to do so that's why I forced the time limit on myself.

It's funny about being calming. When I start off I know the painting may be so bad I'll never show it anywhere. That's not calming. But if it turns out then my confidence builds and it's a little more calming next time. I guess the more you do it the less you fear it will be a TOTAL failure. And so as you gain confidence, especially if you're happy with the results, it is calming. I'm happy to say that I've had more calm days that not recently!

I do think to, especially if you take it up yourself, that you just need to cooperate with watercolor. If you don't try to bully it or plan it too much, as I often do, I think you'll be pleasantly surprised at your results!

I'm all for loose paintings, even if they're just a break from more controlled ones. I need to stop back at your site soon to see what you've been up to. I know I did like that Oystercatcher that I saw last time.

I've never run across a dead bird in Center City but each year, particularly in spring migration, people are always reporting them around City Hall. So I'm not surprised you found one at Rittenhouse. The poor birds run into the tall buildings with surprising frequency I think.

I did think about drawing some Ring-billed Gulls from my car this morning on the way to work. But I opted instead for the warmth of my studio and the new Canada Warbler! I really enjoy Darren Woodhead's paintings but I think few will follow in his footsteps, at least in cold weather.