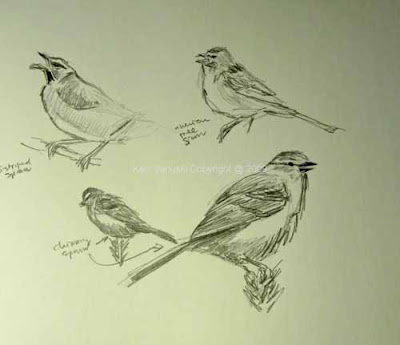 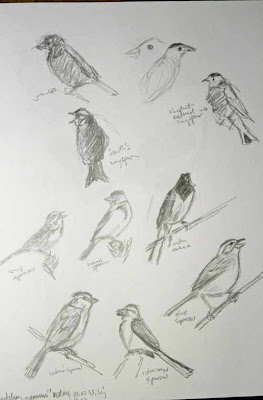 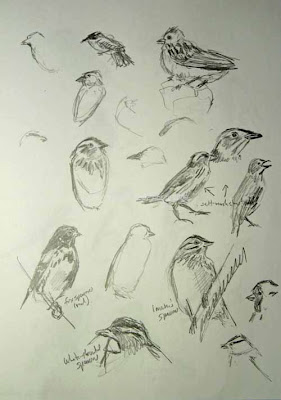 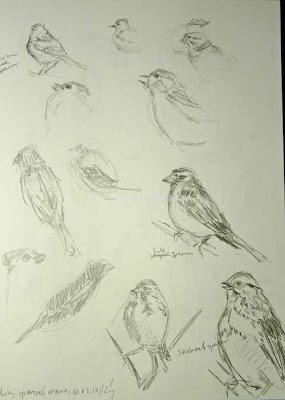 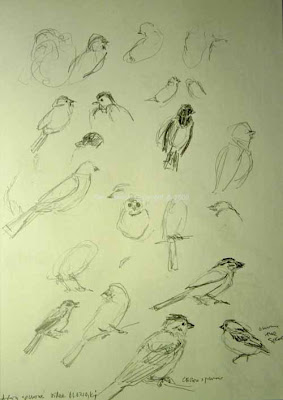 One of the less enjoyable parts of living in a large city is that your yard birds may be dominated by House Sparrows. Though they never appear as the most prevalent bird in Cornell's Project Feeder Watch results for any given year there is no doubt that they outnumber other birds in our yard by about 10 to 1. I suspect this is true for most urban yards.

That doesn't mean that a great variety of birds can't be found in large cities. They can. The green areas that do exist in cities can act like magnets, especially for birds in migration.

So in winter I look at a lot of House Sparrows, and more recently Juncos. And yet I have the hardest time in the world drawing them. I suspect my attempts to draw from life over the last three years might have not sputtered out so quickly if I'd had subjects other than sparrows.

Why? I'm not biased against them. In fact over the recent years I've developed quite an interest in them. The problem is that they're just LBJs(Little Brown Jobs). More than that they're LSJs(Little Shapeless Jobs). Not that they don't have a shape, sometimes even an elegant shape. But when seen quickly before they flit off all I tend to see is a blob.

So over the last few days I wised up a bit. I drew from 'Watching Sparrows' by Michael Male and Judy Fieth. My thought was that by looking at enough sparrows, and trying to sketch them I'd finally get some idea of their structure.

And I did. I still need a lot more practice but I feel like I'm finally getting some idea as to how the head fits with the neck and body, how the feather tracts work, where the legs are, and how the tail attaches. All of this seems obvious until you try to finish off a sparrow whose bill and head is all you've drawn before he has moved off.

I started off by just sketching the sparrows at the speed of the DVD. But then I realized that I really had some captive sparrows. So I started pausing the video. All but one of the enclosed drawings is based on stopped video.

It doesn't beat being outside with real birds. But it is a good substitute in 20 degree weather with strong winds.
Posted by Ken Januski at 7:58 PM

Some great sketches here, Ken! I'll have to check out that dvd ... missing all of our summer Emberizids right now (and I'm such a sparrowphile).

Thanks! It really is an enjoyable DVD. I got it a few years ago as a Christmas present to help me in identifying sparrows. But just this week it hit me that it might also be great for helping me to draw sparrows. By the time I'm done watching and drawing I might actually learn something....

Which by the way is much more than I can say for my efforts in your latest venture, digital art. Layers and all the other tools of graphics programs were always just too much for me. I had no patience and just wanted to draw! In any case I'm happy to see how quickly you've taken to it and look forward to seeing your progress.

Hi Ken, I just found your blog through South Carolina Low Country Nature Journaling. Lovely sketches! I occasionally sketch from DVDs too, the problem being I get so wrapped up in the nature show itself that I forget to hit "pause"!

By the way, I really liked your quote from Vadim Gorbatov in 'Portrait of a Living Marsh'from your mid-December post. It really spoke to me. I may have to post it by my desk.

Keep up the good work!

Thanks for your comments! And I'm glad you enjoyed that Gorbatov quote. As you can tell it obviously struck me as well.

My wife also ended up watching the 'Watching Sparrows' DVD as I drew. She just happened to be walking through the room and got caught up in it. But then I had to rudely pause it every once in awhile and draw something. Such are the travails of art! No rurprise by the way that our cats get caught up in it..........