If It Looks Like Work, It Must Be Art 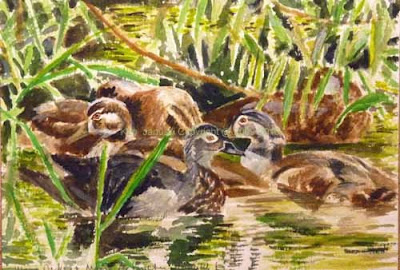 As I was out walking along the Wissahickon today, sketching and counting birds, I ran across the huge rootmass of an overturned tree. Looking at all the complex shapes, textures, areas of light and shadow I couldn't help but think it could make a good subject for a drawing or painting. Then I shuddered.

Why? Well I asked myself if I was really interested in drawing or painting the complex structure. Definitely not. It held no interest. Unlike the surrounding birds, trees, water, sky and clouds. It's only real interest, at least for me, is that it would be a challenge to render the complex mass into two dimensions. But I realized it would be a technical challenge and nothing more.

Not all artists would look at it this way. There are some artists I think who do take pleasure in looking at and portraying such structures. But many don't. Instead I think they think of it more as a technical challenge, which it undoubtedly is. And of course I can't really speak for other artists. Only they know why they do something.

But I think I can read the audience pretty well. Many people like art that shows evidence of work. What better evidence of 'work' than being able to render the complexity of such a rootball into two dimensions?

When I looked at that rootball today I thought about drawing it for a second then felt the cold chill of depression. It was really depressing to think about drawing it. I think that's because it would have been nothing more than a technical challenge for me, i.e. WORK!

It's hard, and probably inaccurate, to gauge what most people who look at art think. I know that some really love it. This is evident in the joy with which they talk about it. But for many others I think it's something that makes them uncomfortable. They know art is supposed to be something good and civilized, but they don't know how to judge it. So one way is to try to gauge the amount of work that went into it. If you can see it took some work then it's good.

But this is such a sad, misguided way of appreciating art. It almost turns art on its head, from something that should be enjoyed or at least found moving, to something that can be measured, even worse measured by a Puritanical tape measure - how many hours went into it, how much time spent rendering all those shadows, each of those infinitesimal rootlets. 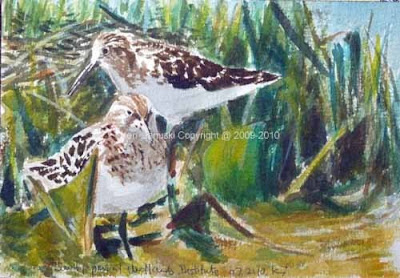 Well all of this leads me back to my theme of the last week or two: subject and background. I've shown paintings with no background and with complex backgrounds, one background based on the complex shapes that I actually saw, the other based on a loose representation of what I saw. I did two other watercolors at the same time and they're both above.

At top is a number of juvenile Wood Ducks seen at Morris Arboretum wetlands lasst week. Immediately above are two Least Sandpipers seen at The Wetlands Institute in Stone Harbor, NJ in May, 2010.

When I criticize art that looks like work I don't intend to indicate I'm lazy and only like the work of lazy, sloppy artists. I work a lot on my art and probably worked even more, in the sense of time spent, on my abstract art. I don't think that good art comes easy. It does entail work just like any worthwhile endeavor.

But I think the difference is that good art actually seems effortless. The audience shouldn't even realize how much work the artist put into it. They should first enjoy or be moved by it. Only later maybe they'll consider the work involved. But even then WORK may be something that's only visible to those who know something about art. I hope that the sense of light in my wood duck painting is enjoyable. But it was some work to figure out what areas to make light and which dark. This is the type of work that you can rightfully expect of an artist, making professional decisions about his work to make it as strong as possible. Just like you appreciate a car that runs reliably but don't really care to know the specifics of the engineering. Imagine how much less enjoyable your next ride would be if you had to listen to a recital of all the technical decisions. This is painful, a Puritanical notion of art and engineering.

You just enjoy the car for the reliable ride and art for the enjoyment it provides, no, non, nein, uh-uh for the work involved.
Posted by Ken Januski at 1:05 PM

Hope your wife is continuing to feel better. Sorry to hear she was so sick.

It's amazing where a walk in the woods will lead you. I never thought that seeing that overturned tree and all its roots would lead to a blog post!

Happily my wife is finally getting back to her normal self. I knew she was really sick when she looked out at our garden and didn't have the slightest interest in going out to see it, weed, etc. Thankfully she'll have the month of August to enjoy it. Though August can be hot it also can have beautiful sunny 70-75 degree days like today as you may well remember.