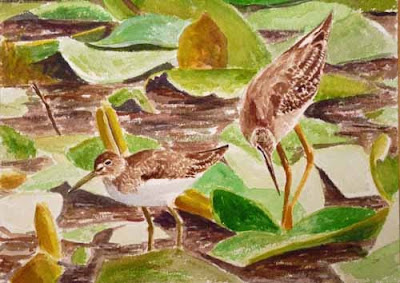 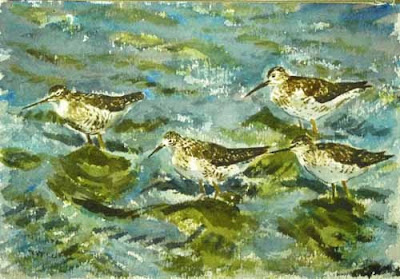 Immediately after finishing the American Oystercatcher of my last post I started some new paintings, all of which had backgrounds. Actually there was a flurry of paintings, helped a bit I'm sure by the fact that I had no internet connection and so could devote myself to painting. No distractions!

I'm only showing two here and will show the others in another post. The top one is a more developed watercolor on 9x12 inch 300 pound Arches cold-press watercolor paper. It's based on photos I took last year of a Solitary Sandpiper and Lesser Yellowlegs that completely disappeared in the mud and water lilies at Crane Creek State Park in Ohio. The combination of the way that the birds were so well hidden against the background as well as the fascinating pattern of the water lilies has helped to make me want to keep painting the scene. I also did another version last fall, though I wasn't happy with it.

The second watercolor, on some very old rough 140 pound Arches watercolor paper, is of some Greater Yellowlegs seen at Heislerville WMA in New Jersey this spring.

In the top painting I've tried to be pretty accurate in the background. Because the background is primarily the discrete shapes of the lilies I think I wasn't quite as scared off by it. The problem of course, just llke my version last year, is that it's easy to get a little too tight, to tend too much toward coloring in the shapes. This is a great improvement over last year's version. But I think I foresee another version on the horizon at some point.

The second painting on the other hand has only the vaguest connection to a realistic background. I've changed the color of the water drastically, though the pattern of the waves is somewhat accurate. Nonetheless I do really like this painting. There is something vibrant about it and you can still understand the scene.

So in my last three paintings I've shown three different ways to deal with background in bird art. I didn't plan to do this. It's just that each scene seemed to call for a different treatment. So that's just what I did! One of the beauties of art is that you can do exactly what you want.
Posted by Ken Januski at 4:54 PM

Lovely backgrounds. I love the waterlilies and waves, especially with the July heat and humidity. Viewing these drawings I feel cool and light. Refreshing.

I think we'll probably both need something refreshing today. Forecast for here is 100 with heat index of 107! It was 82 at 8 a.m. I doubt it's a whole lot better up your way.

But soon the cooler nights of August will be with us. Hard to believe how quickly the seasons pass.