Some More Herons (YCNH I Think) 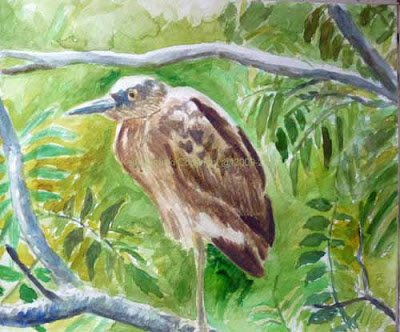 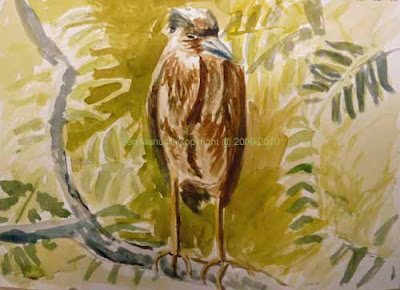 I knew when I did the field sketches of the probable Yellow-crowned Night Heron last week that I'd want to do some paintings as well. Immediately above is a quick sketch that I did last week soon after the sketch. The image at top is a much more developed watercolor on good paper that I did today. In both I took advantage of the decorative pattern that the surrounding foliage offered.

I also tried to be true to the colors of the bird and its surroundings. The many green leaves, turned white or yellow in bright sunlight, also turned the muddy water gold, yellow and green through their reflections. The bird itself is fairly nondescript, mainly brown markings on off white or more brown. Only the blue-gray bill and some blue-gray on head, and of course the yellow eye, gave much real color to the bird.

As I said last time when I posted the photos I did so because I wanted any readers of the Pennsylvania Rare Bird List who questioned the likelihood of an immature Yellow-crowned Night Heron to have a place to see the photos and sketches. I've not heard back from anyone questioning this ID so I think that most likely I'm correct in saying the bird I saw and painted was an immature Yellow-crowned Night Heron.

Herons are just the best birds for painting and drawing so I feel lucky to have seen so many recently.
Posted by Ken Januski at 2:28 PM