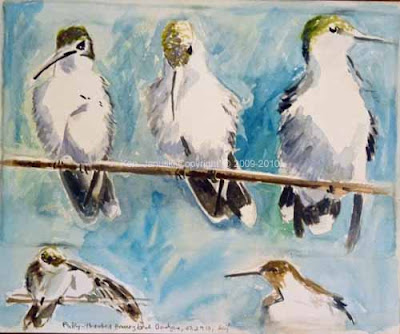 Hummingbirds, and I'm talking about only one species, Ruby-throated Hummingbirds, are a bit of a mystery to me. I've seen them in the forested area of the Wissahickon in May if not April. But we never see them in our yard until July. I believe that the ones that we see in our yard, feeding on Monarda, Trumpet Honeysuckle, and other flowers and insects, are either females or young. Common wisdom seems to be that at this time of year most yard hummingbirds are female or young. I don't have any reason to believe that this isn't true. But I also haven't ever had the time to really investigate why this is the case.

I have been able to notice what I've seen though. And nearly cried in desperation. How in the world can you capture something so small and so active? The wings are just a blur. Last year I had few successes. But this year, especially since I've been doing field sketches on a regular basis, I vowed to do a better job with hummers.

The painting at top is a composite from a number of photos of one or two hummingbirds from one night last week. I've never really been able to figure out how long the wings are, or where they're placed on the body, or what they look like in flight. These watercolor sketches try to portray some of those answers. This is not a realistic portrait as you could well guess. There were no hummingbirds sitting together on a tomato cage like in the painting. This is the same bird seen in different photos and just plopped together on the page.

In real life hummingbirds are feisty and would be very unlikely to sit together like that. When we see two in the garden you can bet that they're fighting. And this is part of my lack of understanding. If they're females they're not fighting for territory are they? Or are they in fact fighting for food sources? 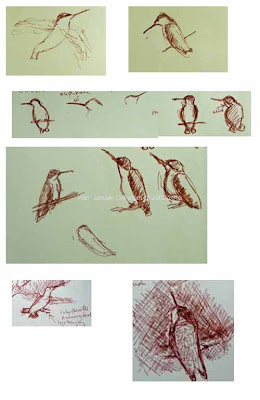 As I said I've vowed to draw them more this year. The photo above is a composite photo of a number of field sketches where I just cut out the hummingbird drawings. Slowwwwlllly I'm getting comfortable drawing them. One problem though is that you can't see that much with the naked eye. If you use binoculars then you have the problem of memorizing what you see, putting down the binoculars, and then putting it down on paper. I thought that I'd solve the problem this summer by setting up my scope in the kitchen and focusing it on a part of the backyard where I've often seen hummingbirds. Of course every time I did that the birds disappeared and we couldn't move in our own kitchen since the scope and tripod took up so much room. Finally I abandoned that tactic. In the end I've used a combination of naked eye field sketches and works based on photos as seen at top. 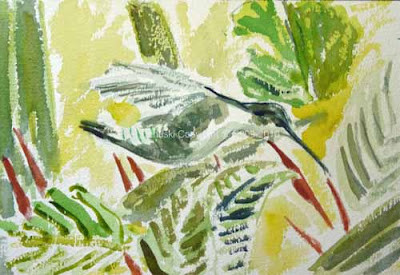 One particularly difficult part is showing their wings when they're hovering. I don't believe this can actually be seen and understood with the naked eye. Even the photos I've taken of them with hovering wings have been fuzzy. Finally I decided to do a 15-minute painting based on such a photo. The virtue of a flash painting like this is that you don't have time to worry about details. You just put down something. I'm not really happy with the background here. It competes too strongly with the hummingbird. But I'm happy with the bird. A quick painting forced me to use shorthand to render the bird in flight. It's given me some hope for a real painting one day.

Maybe by that time I'll know a little more about Ruby-throated Hummingbirds.
Posted by Ken Januski at 6:02 PM

I really like your paintings and sketches. Hummers are definitely one of the most difficult subjects to study! And then on top of the enormous challenge of getting the anatomy correct, an artist then runs the risk of making them cutesy. I think you've done really well at dealing with both of these challenges.

I don't know about the hummers in the mid-Atlantic, but here in the Rockies (where we get 3 species!) the males migrate back south in July which is why we only see females and young this time of year.

I am envious of you getting hummingbirds in your garden. When we lived in Philly, I planted all sorts of hummingbird plants and attempted a feeder, but in our entire 13 years in our old house I only saw a hummer one time.

They are difficult subjects aren't they? Oddly enough there was a rerun of a Nature episode on hummingbirds on Sunday night and we watched it. I didn't learn a whole lot but did get some idea of how they move their wings and why it's so difficult to portray them.

Speaking of cutesy birds I just did a commission for an Eastern Bluebird - another good candidate for a cute bird. But I think I was successful. The people I've shown it to including the client were happy with it. But I was a bit scared to try it for fear of being cute. That should be the subject of my next post.

I've been a subscriber to PA rare bird list for a few years and have the impression that only females and young are around this time of year. If I searched back through the archives I could probably find some that said males migrate back earlier. That does ring a bell. And I bet that they behave pretty much like the ones you have in the Rockies. I just hate writing about something like that when my knowledge is so murky, and I don't have time to do more research!

For years we hoped to get hummingbirds in our Philadelphia yard but were unsuccessful. Then we planted Monarda and a Coral Trumpet Honeysuckle. And come July we start seeing hummers. They do visit other flowers but I do have to wonder if those two flowers aren't what really attracts them. For some reason they also like to sit on the top of our tomato cages. That's about the only time they sit still long enough for me to sketch them.

Still need to comment on your Seerey-Lester post. But I want to go back and look at a book that had some of his paintings that I admire before I do. Maybe this will give me the impetus!!