Story of a Commission 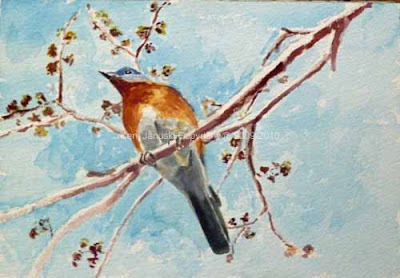 A few months ago I wrote about never winning any prizes. It never really bothered me; it was just the truth. I could say the same thing about commissions. I don't recall ever having a commission for art.

That's not to say I haven't sold art, just never by commission. When I went to art school many years ago commissions were frowned upon. The unspoken rule was that buyers came to artists and took what was on offer, not vice versa. I largely went along with this. And yet I also knew from my study of art history that much of the world's best art was done by commission. It also bothered me that this rule automatically wrote off some very well meaning people who really liked art but wanted a particular type or subject.

Since I've been involved in wildlife art for the last few years I realize that it's common in that field. Certainly very few artists contemptuously refuse a commission.

So when a client who had bought one of my older watercolors contacted me last week about buying a new one I mentioned ones I thought she might like that were available on my online store. Somehow or other the subject of bluebirds came up and thus was born my first commission.

But there was a problem. There are many birds that I've painted or sketched many times, birds that I have taken numerous photos of. A commission with one of them as subject would not be particularly daunting.

I really don't see Eastern Bluebirds all that often. I have seen them under ideal conditions, for instance a sunny day against the background of pure white snow on a Christmas Bird Count at Schuylkill Center For Environmental Education in Philadelphia. However I didn't take photos or make sketches. 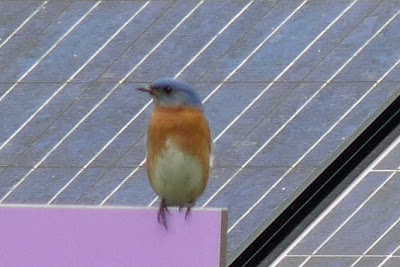 Above is one recent photo, from another bird count at SCEE in late spring of this year. But there's no detail and it just looks ordinary. I just couldn't foresee a good painting based on it.

I and Jerene had also seen some Eastern Bluebirds at SCEE on New Years Day a couple of years ago. But I did no sketches and my photos were too dark to be of any use. 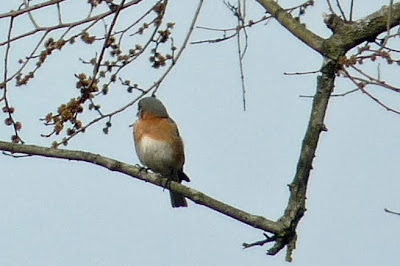 That left a few photos of some bluebirds seen at Morris Arboretum this spring, as above.

But there's nothing there: just the bird, a few limbs, leaf buds, and sky. This might make a traditional 'cute' picture of a bluebird but I just couldn't see how I could make a fresh, vibrant painting of it. And since I see them annually at most I just didn't have any sketches or intimate knowledge of them.

What about using someone else's photos? NO! I don't like using photos to begin with, I think because they're already one step removed from the subject. But at least with my own photos I have an emotional recall of the bird. There's an emotional response to the photo and art thrives on that.

Finally I decided to try one from the last group of photos. I didn't have much choice. 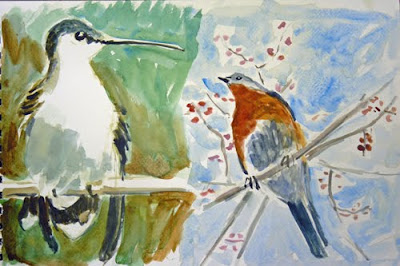 I'd been working on some quick ruby-throated hummingbird sketches at the time so whipped up the first version on the same sheet of watercolor paper. It wasn't much but it least it showed my idea for the composition. 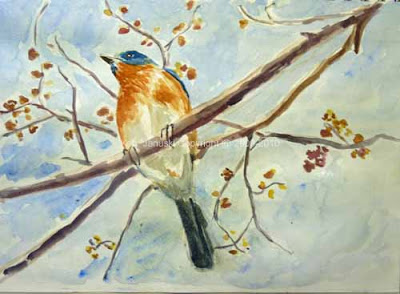 The next morning I spent a few hours on a more developed watercolor on cheaper paper. I showed it to the client. She was quite pleased.

So over the following days I worked on the final version at top of this post. Half of that time was just spent staring, figuring out whether any more work would ruin the freshness that I thought the painting had. Finally I got up the nerve to show it to the client. She loved it. It's now with UPS on the way to her.

What did I learn from this? In one respect something I've known for many years: artistic constraints don't really constrain you. Instead they are a great opportunity and force you to try something you might never otherwise do. It is a way to grow. I'd looked at those bluebird photos many, many times and always decided that there was no painting in them. Then necessity forced me to look a little harder.

I couldn't be happier with the results.
Posted by Ken Januski at 4:22 PM

Stunning, Ken! I love everything about this piece. It's alive!

Nice work. I came across your blog while “blog surfing” using the “Next Blog” button in the Nav Bar at the top of my blogspot blog. I occasionally just check out other blogs to see what others are doing.

Visited Redding Terminal some years ago, and still have fond memories.