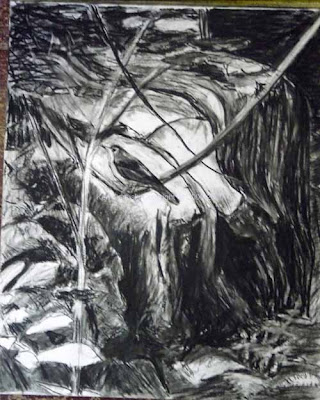 Recent weather hasn't exactly been conducive to getting out and birding and sketching. Too hot and humid. But if you get out early enough it's not horrible.

While walking along the Wissahickon Creek this week I noticed a geologic formation that is fairly common there, terribly warped rocks that look like pulled taffy. I believe that they're metamorphic, perhaps Wissahickon Schist. For more on Wissahickon Creek geology look here. Since I'd been telling some online friends about the local geology I took a couple of photos.

Not yards away I saw a Veery. I've been hearing them and Wood Thrushes all summer long at the Wissahickon but I'm not sure how much longer they'll be here. I've yet to really track their departure dates. Maybe this year. In the past we've just all of a sudden realized that they are gone and that another winter is on its way. 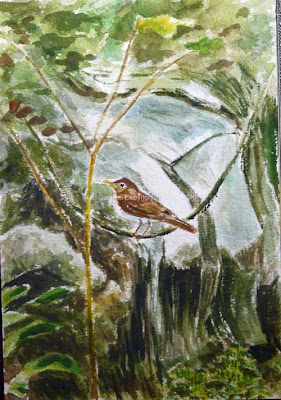 I recently read a book on American watercolors in the Brooklyn Museum. It was quite enjoyable and informative. At one point there was a contemporary criticism of Homer I believe, though it might have been Sargent, saying that they were very good at portraying what they saw, but nothing more. Uh, oh! Somebody wants IMAGINATION, BIG THOUGHTS, etc.

This has always struck me as bogus. Big thoughts are right in front of you, if you portray what you see. Nonetheless there is something to the ability of an artist to construct scenes based on sketches, photos, memory, etc. I've never been good at this. So this time I decided to put the Veery in the scene of the metamorphic rocks that I'd photographed. The first attempt was the watercolor immediately above.

But the veery was not in the photo. I needed to use another of a Veery I'd taken a year or two ago along with my knowledge of veeries to place him in the picture. I think it turned out better in today's charcoal drawing at the top than in yesterday's watercolor.

That's not all that surprising. I'm much more comfortable with charcoal than with watercolor. But at least I'm no longer terrified of it. And now I have two versions. I'm also a bit terrified of portraying rocks. But these rocks are something special. So it was worth the effort.
Posted by Ken Januski at 2:37 PM