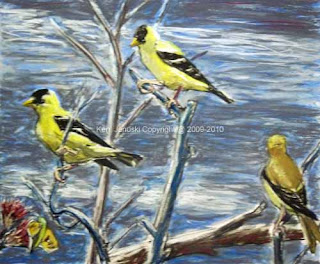 Though American Goldfinches are beautiful birds I've never had a lot of interest in painting them, even when they take their classic and classically photogenic pose on top of some Purple Coneflowers. The reason is simple. It looks like a cliche. They may be the most photographed American bird. It's just so hard to think about them without feeling the wet blanket of cliche settling on my shoulders.

My guess is that this is one element of artmaking that is most unfamiliar to art viewers. Most artists have seen a lot of art. So they can get jaded quickly. My own feeling, and I think it's true for most artists, is that I want my art to seem fresh. Something that can't be immediately dismissed by viewers because it looks so much like art that they've seen before, and often with better examples. At the same time I don't at all believe in the shock for shock's sake school of art that began 100 years ago with Duchamp. I have no interest, or reward, in shocking. I just want my work to look fresh, to get the viewer to actually look at it. In any case because goldfinches can be so cliched I've shied away from them.

But sometime in the last week or so I saw them along the waters edge of the wetlands at Morris Arboretum and I saw them in a completely new light. The cold dark of the water just seemed to really set off the colors of the goldfinch. The pastel at top shows this.

I believe it was that same day that I saw numerous Sachem Skipper butterflies on the Joe Pye Weed also around the pond. They were actually on the opposite side of the pond from where I found the goldfinch. But I felt that this composition needed a little bit of extra color and spatial dimension. So I added butterfly and flower at lower left.

I'm including an earlier version of this pastel below. As I looked at it though I realized that I'd gotten away from the cold dark water that I'd actually seen. And the result was pretty dull. One of the problems of art that allows color, brushwork, shape to become as important as the subject itself is that it's easy to be seduced by them and head off along the wrong track. I liked the blues in the water below as I put them down. The color in itself is just so striking. But as I looked at the entire drawing I realized that the color really didn't look that good with the other colors and also no longer reflected what I saw. So I added some very dark grays to get it back closer to what had originally struck me in the first place. 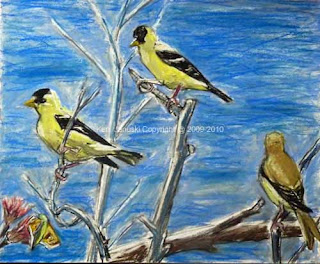