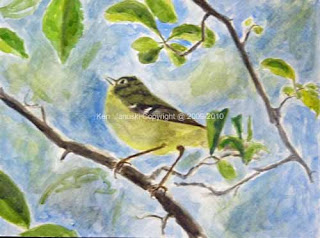 Sometimes you hear people talking about an artist's 'style.' They mean generally something that easily distinguishes one artist from another. Really well known artists, e.g. Matisse, El Greco, Cezanne, Donatello, Mondrian, all have individual styles. But a style, especially for a living artist is both a blessing and a curse. It's a blessing because it indicates that there must be enough consistency in their work for viewers to notice it. They've at least accomplished consistency and aren't just foundering wildly from one style to another. But it's also a curse. What artist wants to do the same thing over and over again? I think this is probably most evident with musicians. How often have you been to a concert where the artist insisted in performing it somewhat differently than you had memorized it note for note from constant playing? I remember the first time I saw Bob Dylan and he played his songs at about twice their normal tempo. Artists really resist being pigeonholed.

There is a reason I bring this up in relation to the painting at top. I think most of my recent pastel work shows something that comes natural to me, a type of boldness. I don't say this to pat myself on the back. Boldness isn't necessarily good. It's just something I feel at ease with, at least when working with charcoal and pastel.

But today I decided to paint a Ruby-crowned Kinglet. I've tried to draw them from life for three years or more, never with any success. That's in fact been the subject of past blogs. In this case though I liked some photos I took this spring of some kinglets right over my head. I thought about doing a pastel, and still may. But for today I did a watercolor. Do you see the problem?

It is not bold at all. It is delicate and a bit tentative. When I looked at the photo, as well as searched my visual memory, I just couldn't see being bold with a kinglet. It's a petite bird. It's surrounded by petite, delicate blooms. The odd thing is that I found it easy to work this way. But I'm not sure that it really suits me, and it certainly doesn't fit with my pastel and charcoal style.

I don't think this is necessarily good or bad. It's just something that struck me as I worked on it. And it may be why I have a vague uneasiness about it - like someone else came in, stole my psyche, and whipped this out. 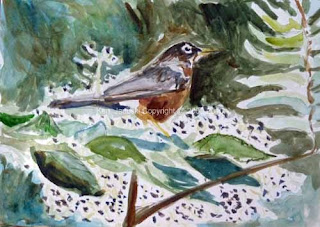 The watercolor above took about 30 minutes. I whipped it out as an illustration for my blog on Devil's Walkingstick. This also really isn't in my style. Or is it? Anyone who reads this regularly knows that I've done quick watercolors for at least the last year. Often they're done for a purpose just like this: to illustrate something. Generally I'm in a hurry so I work on them very quickly and don't bother with niceties. And generally I like them, even with all of their flaws. That's the case with this Robin in Devil's Walkingstick.

In a way I guess it's bold. Or maybe it's just the work of someone who's impatient. Come to think about it that may be my true style: Impatient.
Posted by Ken Januski at 5:14 PM