Devil's Walkingstick - Nectar of the Migrants 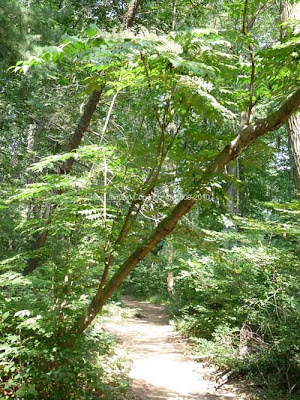 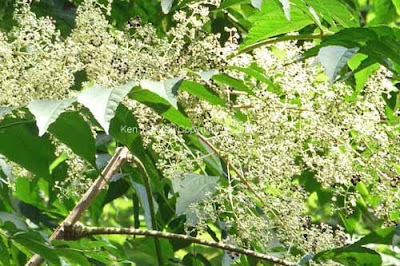 Each year at this time of year I see the value of the American shrub Devil's Walkingstick, also called Hercules Club and Aralia Spinosa. The 'Spinosa' and the 'Devil' give a clue that it is spiky. And yet migrant birds love it. It is a native plant and yet time and time again I read about how it is an invasive that must be eradicated.

I'm not an expert on it. Perhaps it has some hidden noxious qualities I'm unaware of. But I suspect all that prickliness makes in not a 'proper' plant. I'm thinking of keeping track of all the birds I see feeding on it this fall. Today Robins were chasing off some other members of the Thrush family, Wood Thrushes and Veeries. Given the wealth of berries you'd think there wouldn't be a problem with sharing. I've also seen Swainson's Thrushes on it later in the year. Woodpeckers also found it irresistible today. Both a Downy Woodpecker and a Northern Flicker were on them. And, maybe most surprisingly, last year we saw a Pileated on a small 6 foot shrub. I assume they were all eating buries. Most birds get themselves so buried in the plant that it's hard to tell what they're doing.

But my favorite birds that love Devil's Walkingstick are American Wood Warblers. Black -throated Blues in particular love it. If you have this plant around you can almost guarantee finding some Black-throated Blues on it in September and October, if the berries haven't already been eaten. I can't recall all of the other warblers we've seen so I'll keep track this year. I'm pretty sure that Northern Parulas are one of them.

As I've said many times I don't like using photos. They just leave me feeling empty. But I didn't feel like I had time to do anything else today, AND I'm just not sure of what the quality of the art would be.

*********
The next day: It's been bothering me that I can't find a way to keep track of what birds others see feeding on Devil's Walkingstick. So thanks to Blogger I've created a new blog devoted entirely to that. Please visit and add the birds you've seen as well as your location as a comment.
********* 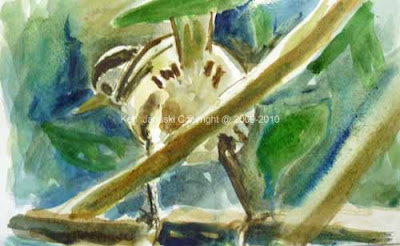 That wasn't the case with the 15-minute watercolor above. Yesterday I found at least five different warblers, migrating I'm sure. The high point was a Blue-winged. I also took a couple of photos. But when I got home and saw this one I couldn't begin to figure out what it was. Can you? This watercolor is not very detailed. But I deliberately made it somewhat confused because that's exactly what it was in the photo. In fact I've probably accentuated some clues that weren't quite so evident in the photo. It's a Black and White Warbler. In the photo the dark above eye looked like it covered the entire head and made it even more confusing. And the butt, which more or less takes up the entire picture, had a buff wash I'd never noticed before.

In any case I just wanted to do a quick version of it because it was so surprising. Try as I might I couldn't get any sketches of the other warblers, including a Canada.

Because migration of the passerines has started here I've had an excuse to be out the last couple of days, birding and trying to sketch. But those two pastels from last post are still there waiting to be finished. I did ditch the paisley bell bottoms.
Posted by Ken Januski at 1:47 PM