Seeing the Bird for the Feathers 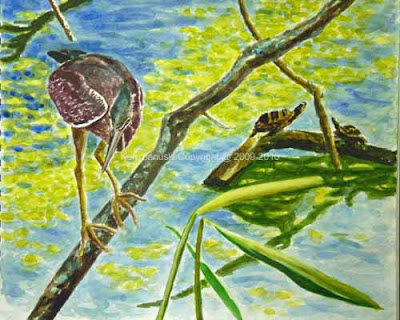 Almost a year ago my wife and I saw a young Green Heron at Tinicum(John Heinz NWR) in Philadelphia. All Green Herons are striking in color, shape and pose, but the younger ones have an intricate pattern on the wings which is particularly striking. This one had the added appeal of just sitting 10-15 feet in front of us and not moving. This was puzzling and I wondered if perhaps he was a migrant who'd just flown a huge distance and was too worried about food to be concerned with nearby humans.

In any case I did a number of sketches and took a lot of photos. And I did a really unsatisfactory watercolor of this handsome heron. I was never satisfied with it and always felt I hadn't done justice to a great bird and a great view.

A few weeks ago I took him up again. I'm looking at the first new version from a couple of weeks ago hanging on the wall six feet away. Sorry but it's just too bad to submit to public exposure. 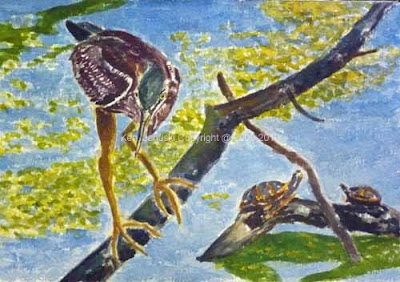 The second version, from about a week ago, is above. I'm not really happy with it either. Like the first one there is almost no sense of transparency, none of the vibrancy that accompanies the type of watercolors that I like, in fact the type that is my only justification for doing watercolor. If I'm going to use opaque paint I might as well just use oil or acrylic. There is something I like about it, maybe the blue of the water, but all in all it's another disappointment

Because I was bothered by the lack of transparency in both this version and the one from a year ago I decided to be very careful about losing it in the newest watercolor at top. I finished(?) it yesterday.

This one has a better sense of transparency and freshness. Not as much as I'd like but still some. And yet I'm still a bit uneasy with it as well. Why? Well one thing that has struck me in doing these, and going back to the title of this post, is that it's all too easy to get fixated by the complicated pattern in the wings. I'm not a detail type of guy, at least not in art. I don't have the patience. And I don't really like much art that focuses on detail. Not that it's not accomplished. Just that it's not to my taste.

Of course other birds also have detail. If you are close enough to see almost any bird you can see a wealth of detail, much of it quite striking. But I think I've gotten comfortable enough with portraying some birds, like warblers, sparrow, shorebirds, so that I use shorthand to indicate the detail but not actually portray it. My guess is that's what I need to do with this heron. But I'm like a deer frozen in auto headlights. Once I see the pattern in the wings I become transfixed and feel like I need to paint every little detail. I don't see anything else.

My guess is that this starts me off in a tighter style than is comfortable for me and I never really recover.

Another possible problem, and I encountered it in my Glossy Ibis watercolor as well, is that I tend to use an opaque color to render the maroon like color. This immediately puts a darker value in the painting that then becomes hard to orchestrate, like a Concerto for Tuba. I did start off the heron in a very light wash. But before I knew it the bird was largely opaque.

Finally there is the complex design and space. By letting the branch on which the heron stands go off the page I flattened the design. The slashing diagonal mark tends to make the painting look like a two-dimensional design. It works against a three dimensional reading. But I knew that and stopped it before it went off the top in an earlier version of this painting. However I didn't like the looks of that and decided to let it go off the page, well aware of the danger of that.

Adding the foreground foliage also complicated the design and sense of space, as did the turtles on the log, and the stick in the water at upper left. These are all compositional decisions that may or may not work. They complicate the painting. If I'm successful then I think they can add to the painting, especially as they're indicative of the environment in which you actually find herons. Unlike Great Egrets you don't often find them artistically placed as a graceful silhouette against simple blue water. If I fail to bring this complex design off however the end result can be a mess. I think I've barely avoided a mess here.

For now this is done. It's possible over time that I'll decide to go back into this. But most likely any changes will be in another version.

It's almost the anniversary of seeing this bird. It may be time for another trip to Tinicum.
Posted by Ken Januski at 12:35 PM

"But I'm like a deer frozen in auto headlights. Once I see the pattern in the wings I become transfixed and feel like I need to paint every little detail. I don't see anything else."

- I feel your pain, Ken. I have been caught in this sticky web many, many times. I find this especially hard when I get roped into painting the detail and then when I "come to" and step back from the piece, I realize that the detail is in something extraneous and it pulls the eye away from the main point of focus. So then I feel obligated to make the focus highly detailed in order to compete and then the piece that I meant to be loose is suddenly overworked, stiff and way more realistic than I meant it to be. *Sigh*
I know I've said this before but thanks for allowing us into your brain and studio. I get so much out of reading about your process. It is great to read about what you were thinking and then see the finished product.

Sadly we don't get green herons in our region. Or perhaps it is just as well that we don't or I would paint nothing but green herons! I love them and find them captivating. I hope you spot another one on your next visit to Tinicum!

"Come to" is a good way of phrasing it! I'm happy that anyone finds any of this interesting. But it is interesting to me so I've always thought that there must be a few people out there in similar situations who might also find it so.

Oddly enough all of that attention to detail, inordinate attention I should say, helped me today I think in my abstract version of the Green Heron. I've looked at the pattern in the wings so much that it was easy to abstract it today and not feel guilty about it.

Speaking of Green Herons I keep reading on the PA Rare Bird List that they're being seen in many places, along with Great and Snowy Egrets. So I guess they must be among the earlier migrants. Maybe tomorrow or this weekend I can go find a few.