On the Easel, More or Less 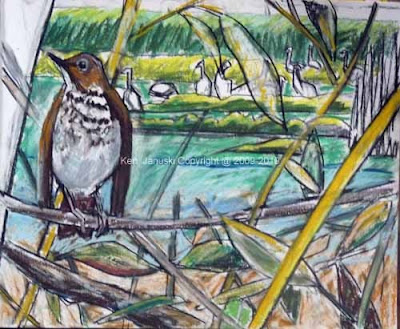 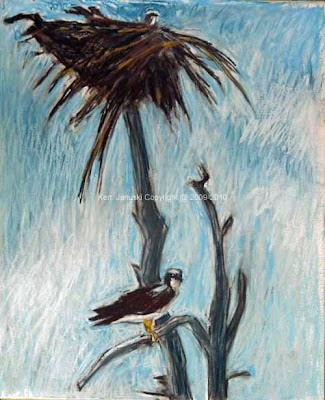 These two pastel and charcoal drawings are both works in progress. I got to a stopping point yesterday with the Ospreys and so decided to make a bold move and try a subject I'd been thinking about for at least six months - combining a Hermit Thrush and some Sandhill Cranes seen at different spots at Horicon Marsh last fall.

I say "on the easel, more or less" because I don't use an easel. But you get the point. They're unfinished works. Who knows how much more I'll do or where they'll end up?

The ospreys offer less opportunity. There's not a lot to work with. I at first thought I could get the silhoutte-like composition to work by the use of color and texture in the sky. But so far it's a bit dull. Maybe more experimentation with the sky will make a difference.

The more exciting drawing to me is the Hermit Thrush with Sandhill Cranes. They were seen within a few hundred yards of one another but they were never in the same view as seen here. However I've toyed with the idea of putting the cranes behind the thrush for months. I think I felt a bit more experimental yesterday because I'd already worked on the osprey drawing. I'd done my work for the day so now I could goof off with this one.

I'm often tempted to leave some completely white areas in pastel drawings, just as I used to do in oil paint. This is different than allowing some white of the paper to show through to give a sense of light. But I think it is connected. It gives a sense of brightness. However it completely breaks the conceit of illusion. If I leave a complete shape white, for instance the tree trunk at far left, I'm calling attention to the fact that this is a drawing.

If I were showing this in a contemporary gallery I could rattle on forever about how this forces the viewer to confront the fact that all art is illusion, blah, blah, blah, blah. But I couldn't stand to do that. Such nonsense, which is fresh in my mind from hearing about a local 'environmental art' show on the radio, drives me nuts. I'm not trying to educate viewers. I'm not dealing in 'issues'. I'm an artist and my concern is visual. So let's just say my preference for letting white show through like this is just a personal preference. I know many people, including many artists, don't like it. But they never liked my paisley bell-bottoms either. I gave up on those bell-bottoms and I've removed the white from many pastel drawings. But for now I'm leaning toward keeping it here. Sometimes you just have to do what feels right, even if it turns out to be embarrassingly wrong in the future.

One possible problem with this drawing is that you can hardly tell that the sandhill cranes are there. That is one area that will probably get more work.

Someone on the Wildlife Art thread of birdforum said something recently about all artists having different ways of destroying work we're not happy with. Some paint over it. Others cut out just the good part. When I worked abstractly I just radically changed what the painting or drawing looked like until I was either happy with it or felt defeated. I haven't pushed myself that far with my naturalistic work and have instead let the work be and saved any changes for the next version. This thrush drawing might get pushed a bit though. Stay tuned.
Posted by Ken Januski at 12:54 PM