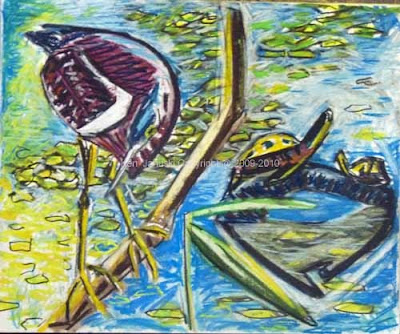 As you may have guessed I've really been taken with the Green Heron we saw at Tinicum last year. Here they're not all that uncommon but the markings on this particular immature bird, coupled with the surrounding environment, made him seem special and kept calling me back for another portrayal.

I've done four new watercolors, two I've aleady shown, one is too bad to show, and the other is below. While showing them at birdforum Tim Wootton, one of the inspirational artists there, suggested that it looked like an abstraction was dying to break loose.

Abstract/non-onbjective art is my true background. I've only worked naturalistically for the last four years. So the work at top is the Green Heron redone abstractly.

I could go on theorizing forever about the motivations for abstract or non-objective art. And I'm sure I wouldn't come up with any definitive answer. But for me at least part of the appeal is artistic expression. I've always likened this to music, especially music without lyrics. No one doubts its power and yet their is no story connected with it. You enjoy the music itself, the melody, rhythm, orchestration, etc. It has a real emotional power. The same can be said for the elements of art, color, shape, brushwork, pattern, etc.

The great difficulty I think with it is that it can lose any connection to the natural world and become somewhat febrile, too much of a greenhouse flower. So to me it needs to constantly be fed by observation of the natural world. At one time I considered this heresy. This was a limitation on art, and an archaic one at that. Not something anyone in 20th, or 21st, century should be bound by. But I haven't thought that for a long while. Nature is nature, regardless of century, and it's always one of the most important sources of art.

All that said you'll have to make what you will of the pastel at top. I'm happy with it and will probably do some more abstract works. I do have to say that I wouldn't have felt so comfortable taking liberties with the heron and turtles if I hadn't just finished so many recent realistic versions. 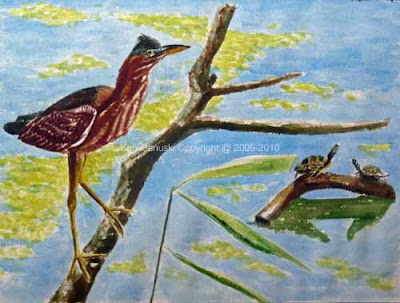 The painting above was the last watercolor. It's also the largest, at 12x16 inches. Oddly I also like it. There are times when the background just seems too empty. But most of the time it just looks tranquil, as it was.

So perhaps this ends the suite of Green Heron paintings and drawings. It's been fun and I think that between them all I've captured some sense of what it was like seeing this one on that day.
Posted by Ken Januski at 11:04 AM

I love both pieces. The wc is very strong. All the elements are working.

The abstraction is fun! That's a good thing as it will catch a lot of eyes and to me, open more folks to take a closer look at nature.

I would like to see the heron's head be more separated in tone from the body. Right now the turtles catch my eye and the heron become a shape - interesting, but an also ran.

We'll see where the abstraction goes. I've held off on it pretty much for four years so I may try a brief run of abstract work now. I do want to avoid cartoonishness and I know it borders on that. But sometimes you just need to take chances. We shall see.

Love the abstraction of the heron, Ken. So much energy! I know I work in a realistic style but I often find abstract art such a breath of fresh air. And I like your comparison of abstraction to music without lyrics.

I also really like the new watercolor. The new positioning of the heron really works and I think the simple background is just fine.

Thanks Gabrielle. The watercolor and the pastel are so different and yet I like them both as well.

I think sometimes that I also need the breath of fresh air that abstraction gives after too much realistic work. Then eventually I feel like I'm missing the need to be true to what I see of realism. So back and forth I go.