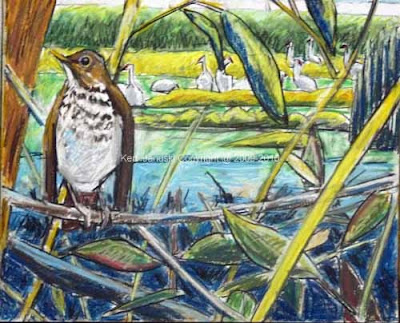 Two posts back I mentioned that I was undecided about the state of my new pastel of a Hermit Thrush and Sandhill Cranes. Something made me want to leave a number of areas of white. I wasn't making any sort of statement. It just looked good to me, just as some paisley bell-bottoms did to me, and not just me alone, many, many years ago. But finally I decided that it was more important to put some color in those areas than to leave them white. I ditched the bell-bottoms.

I think that the version above is the last. It seemed more important to me to try to unite the entire drawing by color than to leave the bright white of the paper. I particularly thought I needed more darks toward the bottom and sides and so that white tree trunk on the left became brown-orange.

This drawing is an accomplishment for me in that this scene never existed. It's a composite of two views I saw at Horicon Marsh last fall. The two scenes are only separated by a few hundred yards and a 90 degree change of direction so such a scene could have happened. But it didn't. Not until my imagination came along. I don't think I ever would have tried this in watercolor. But the loose way in which I use charcoal and pastel made it much easier to do.

Among the many skills an artist needs is the ability to alter reality, even if only slightly. Not all artists do this and for all my hankering for expressiveness I've never been one of them. But I felt that I was limiting myself. That's why this seems like a personal accomplishment. It opens up a lot of possibilities for future paintings. 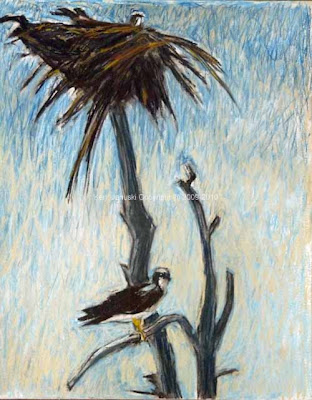 I made far fewer changes to the Osprey drawing. Almost all of them are in the sky. I hope that I've made it interesting enough, through color and texture, to create an interesting interplay with the silhouette of the birds, nest and tree.

I am so liking you pastel work! I agree, it's a great feeling to interpret on paper and not be a camera :) Now I've got to catch up with your new blog!