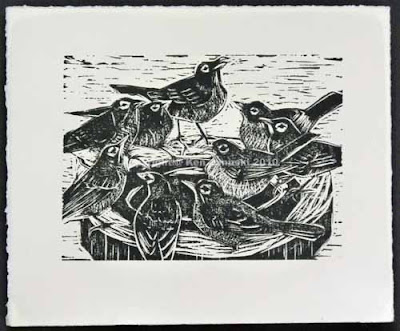 I have just a couple of tiny tweaks left on this before I print an edition. But since I don't know when I'll have time for that I decided to post this version. It's on the same paper, Rives BFK, that I'll use for the edition. Size is 8x11 inches, with the image itself being just 6x9.

One thing that surprised me in printing on this paper is that it's a lot less absorbent than the Hosho I've been using. So I needed to press down much harder on the baren to get the ink to print. But since I'm so new to this I'm sure I'll continue to learn about both inks and papers.

I said last time that I'd mention some of the thoughts I'd had as I developed this. One was a quote from artist Chris Rose about the importance of the quality of line in a linocut. Line can of course be important in any art work. But there's something about linocuts that can make each line really stand out, both a positive line, e.g. the color of the ink, or a negative one, what's been cut away.

In fact in my last Laughing Gull linocut I used some lines in the water that became a very important part of the overall design. And yet I hadn't even comtemplated their existence when I designed the linocut. I just noticed them and decided to develop them and make them more important.

I did less of that here, but still lines did play a part. That was one choice I had to make. Another was how large a range of values to use, especially as I was really limited to just two: the color of the ink and the color of the paper. Through extensive hatching and cross hatching I was able to get some sense of the gray/brown and orange that are dominant parts of a robin's color scheme along with the obvious black and white. So I spent a lot of time working with hatching here, a method really more natural to etching than to linocut. But still I had to do something to enlarge the value range and so that's what I tried.

In a certain sense the regularity of hatching works against the more lyrical and expressionistic lines that seem to be the strength of linocut and woodcut. But I wanted both so it was another challenge to try to have both without them contradicting one another.

And then there is all that white, of the snow on the ground, of the snow and water in the birdbath, of the striking eyes of robins. As I developed this I tried it to get the white to work with the black and quasi-grays.

As I said earlier, I was really struck by this scene when I first saw it in our backyard about 4 years ago. One of the beauties of art I think is that there are no rules that say you can't go back and redo a particular theme. If Hitchcock can do it why can't I!?
Posted by Ken Januski at 1:20 PM

Hi Ken, Sorry I've been bogged down of late. I am loving your lino cuts. This is a strong piece. I like your original wc too. Love the brush strokes and I think it works. Not all wildlife art has to be anatomically dead on. To me, you've captured their spirit and life. That's what draws me in.

Have a very merry and a happy new year!

Thanks Pam. I had to think of you the other day when the lunar eclipse occurred.

I've been thinking about writing a new post on 'wildlife art', so your comment is very timely.

Merry Christmas and Happy New Year to you as well!

I've been meaning to drop a note since you started posting your linocuts. I've always loved woodblock printing, which I see this is a variation. It looks harder than watercolor.... Beautiful works. Do you think it is hard to learn? Do you have to be proficient at some other form of art before you try wood or linocut?

Hi Ellen and Merry Christmas to you as well!

Linocut is brand new to me so I can't say too much about it. I do think though that, outside of drawing, it may be one of the easiest ways to make art. It's not easy in terms of technique since you have to buy some linoleum blocks, cutters and ink, and then learn how to use them. You can use any paper to get started so don't need to buy it. And the image prints in reverse. So that's hard in a way.

But I think it's much easier than other forms of art in that you don't tend to be as critical of the end results as with some other media. Lino and woodcut lend themselves to inexactness I think. My guess is that more people stop making art because their first attempts doesn't have enough detail than for any reason. But with lino you don't tend to think that way and I think have a much easier time being happy with the results. And when you're happy then you keep at it.

I wish I could offer advice on beginning materials. I happened to have some old woodworking tools that I could use as well as old oil-based ink and even some old Japanese rice paper. So I bought almost nothing to start.

But for you it would be harder. I think Speedball offers a beginning set that has a lot of the materials you might need to give it a try. For paper I just used printer paper until I was ready to print an edition. Then I used good printmaking paper. But there's no reason to start with that.

My old materials included oil-based ink so I've stuck with that and even bought some new oil-based inks. But I know that water-based inks are available. They won't smell, won't use up natural resources, won't require paint-thinner to clean up, etc. So you would probably prefer to use them. I think eventually I'll switch over. But for now I have a lot of oil-based ink on my hands I ought to use up.

Good luck if you try it. My guess is that you'll like it.