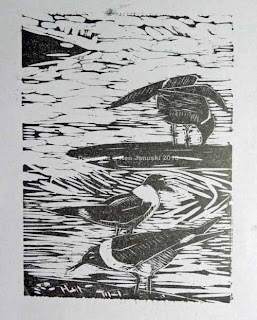 As I continue with relief printing I keep trying new things. Over the last few days I looked for a new subject. Finally I decided on a reworking of a quick watercolor of some Laughing Gulls I did early this year. 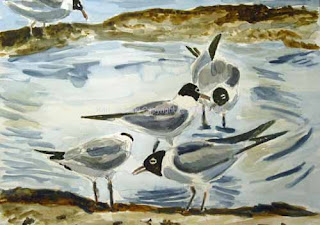 As you can see it's just a very quick watercolor. As I look at in the flesh almost six months later it's pretty disappointing. And yet there is something I like about it as well as Laughing Gulls in general.


So I decided to do some more sketches of the gulls based on photos I've taken over the last couple of years. The first sketch is the gulls in various poses. 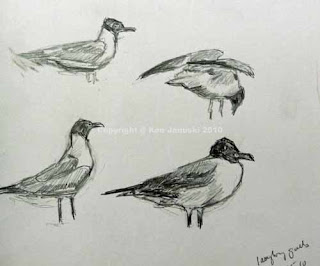 The second was my idea for the final composition. 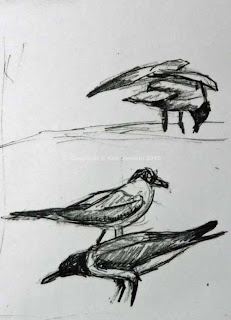 Once I had an idea for the final composition I needed a way to get a reverse image on the linoleum block(since it prints in reverse). Like last time I copied the final sketch onto my computer and printed it at the same size as the block. I then covered the broad outlines in red chalk. 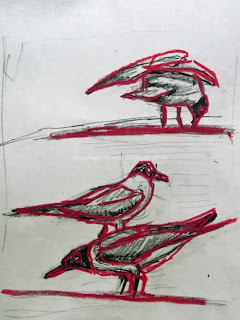 Doesn't look very hopeful does it? Then I rubbed the paper on top of the block so that it would transfer and give me a pattern for cutting the linoleum. It looks even more hopeless. 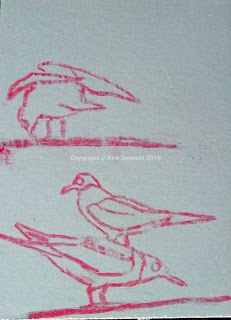 You really wouldn't think you could anywhere with that would you? But for me most of my work is improvisatory. I react to the medium itself. I just need a framework to start. The version at the top is number six for today.

Most likely there will be a few tomorrow before I call it quits. So far I'm happy. I particularly like the variety of marks as well as the gulls themselves. What I'm not quite happy with is my rendering of the gray on the back and wings of the gulls.
Posted by Ken Januski at 5:53 PM