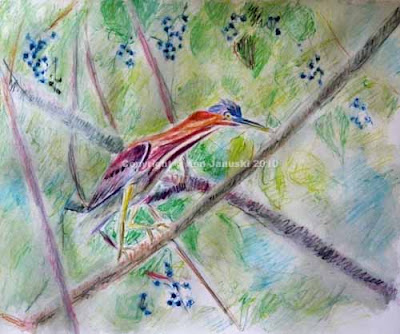 As usual there's a bit of a double entendre in my title. The immature Green Heron pictured above was surprising in his behavior(I discovered him above me where I thought I might find a Yellow-billed Cuckoo), and the medium I used for this is watercolor pencil, a set of which I received for Christmas two years ago and which I've never learned to like.

I was at Morris Arboretum in Philadelphia sometime this summer and heard a harsh clucking sound above me, in a heavily leafed out Horse Chestnut if I remember correctly. There was also a lot of activity across the stream to my right, Paper Mill Run. Perhaps it was even early fall as I know I was looking for wood warblers along the stream. When I heard the sound I thought it might possibly be a Yellow-billed Cuckoo. So I put my binoculars above me. There I was astonished to find an immature Green Heron.

I'm always thrown by herons in trees, just like Wood Ducks. Even though I've seen them there, seen them build nests there, and of course that's where they're at in heronries my primitive brain still says: Herons=Water.

I don't believe I got any field sketches that day. But eventually I got some photos, particularly when he flew to some trees, covered in wild grape.

As I was looking through my old photos for inspiration yesterday I was struck by a photo of him in the trees, along with many of the wild grapes.

But why did I choose watercolor pencils? I have only had bad experiences with them. They are in a word: recalcitrant. They don't seem flexible at all. I did pick some up this summer or early fall I think and do a drawing or two. I still couldn't stand them but at least I saw what seemed the proper way to use them: lightly, wtih a soft touch and no expectation of rich colors. Love tints or love trouble.

I'm not big on washed out, tint-ridden work. I like something bolder. So why try these for the heron? Well for some perverse reason I thought that I might be able to use them boldly, maybe mixing them with watercolors, or at least using watercolor brushes rather than waterpencil brushes, with their limited flexibility.

But once I got started I lost all thought of boldness. The boldest I got was to sponge out most of the background toward the end when I felt it competed too much with the bird itself.

The other reason I think I did this is that I just felt like working differently. I've been doing linoleum cuts for about 6 weeks now, with I think one quick watercolor thrown in. I wanted a change.

This Sunday I should have my interview at Printsy posted online. In it there's a question about getting around artistic slumps. My answer is to switch to a different medium. That's what I tried here.

It's disappointing. But not so disappointing as to dispel the notion of finally figuring out how to use watercolor pencils in a productive way, at least once a year or so.
Posted by Ken Januski at 11:57 AM