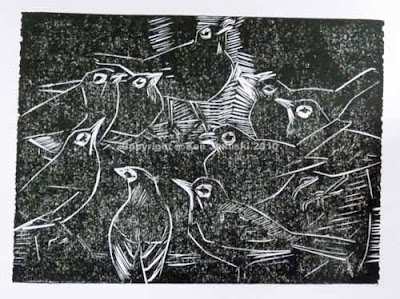 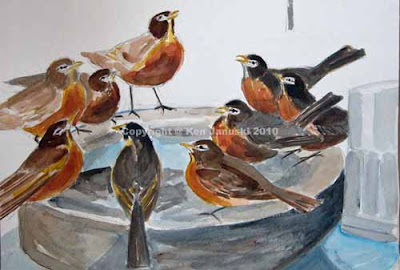 The odd thing is I thought it was successful because I'd been so happy with the original composition, based on nine robins at our backyard birdbath during a blizzard of late 2006. I did admit in the back of my mind though that I didn't understand birds, even robins, well enough to paint them well, and even if I did I certainly didn't have command of the watercolor medium. It seemed like my many years of experience with oil and acrylics counted for nought with watercolors.

But that image still stayed with me. On Thursday and Friday I did some preparatory sketches and finally started a new linocut based on those robins. I just loved the sense of a peak into the social world of birds, in this case a highly gregarious social world.

I also liked the many striking eye-patterns in this grouping so that's what I've accented first. Who knows where this will end up but I think it's safe to say that there is a long way to go.

But it went nowhere today. Instead we decided to get up at 6 a.m. so that we could go spend the day in primarily sub-freezing temperatures and count birds. This year marks the 111th anniversary of the Christmas Bird Count. It was developed partly in reaction to the Christmas Side Hunt, which as you can imagine was some celebratory holiday hunting.

111 years later it's hard to know what it means to people. Many things most likely. For us it means a chance to get outside in less than ideal weather with a specific goal in mind: contributing to the scientific knowledge about birds in a certain area. I think it's that sense of science that forces us to stay out longer, finding birds that really should be around, like today's Winter Wrens, Golden-crowned Kinglets and Yellow-bellied Sapsuckers. There's something exhilarating about being out in cold weather, especially if you're dressed for it. Then there's the added bonus of both seeing, or hearing, birds and knowing that you're contributing to an honored tradition that both helps science and the birds that you're seeing. A wonderful holiday activity.

And because of that my poor robins at top remain at version four, cockeyed no less because I didn't bother to register the paper on this trial run. But maybe tomorrow they'll see some improvement.

Fittingly the species with the highest count today was the American Robin: 50. I just wish I'd had the time to look at them more closely. I'm sure it would have come in handy as I continue this print.
Posted by Ken Januski at 6:09 PM