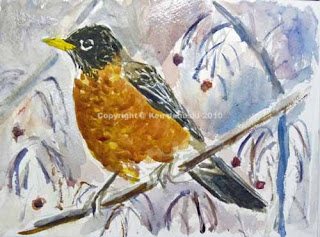 Someone on a birding site I frequent suggested that artists there submit work based on either European Robins or American Robins that they've seen in the last month or so. I believe the European Robin is a traditional Christmas bird so that was the idea. And then since many Americans frequent the site the subject included American Robins.

Of course this was a day or two after all the flocks of American Robins had gone through our crabapple. In the next three weeks I only saw one or two robins, and then only briefly. Then yesterday they again came through as a large flock, stripping off most of what is left of our crabapples. More power to them! That's why we planted the crabapple to begin with. 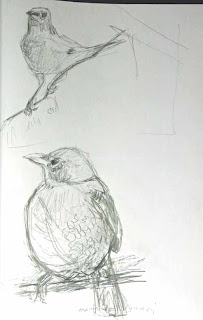 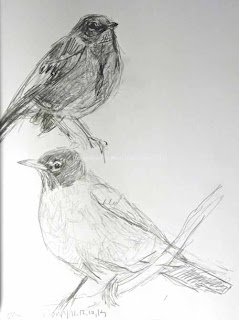 One odd thing with the photos is that all of the birds look somewhat rotund rather than lanky as I tend to think of this common bird. And my drawings and watercolor pick up that stubbiness. That bothers me. But I'll have to hope that they come through again and I have time to do live sketches.

I'm not thrilled with the watercolor. An adult male robin can be really striking. The combination of black, rust orange, white and gray makes for a resplendent bird. That's what I tried to catch. But I don't think it's quite there.

In working on this painting and the drawing I realized how complex both the eye pattern and the bill are.The bills curves down from the top in a surprising way. And the white eye ring is broken up by numerous black spokes. If they weren't so common American Robins might be one of our most sought-after birds. 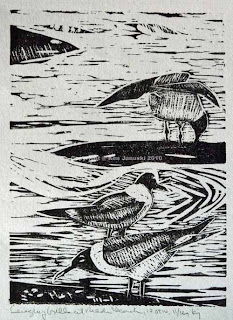 I also finished the Laughing Gulls print a few days ago and printed an edition of 12, one of which is for sale at my etsy site. It's hard to believe but it went through 10 more versions after what I posted here.

The main reason for that is that much of a Laughing Gull is gray. And yet the wings looked black in the version I posted. Since this is a one color print, all black, I needed to try various linear techniques to get the sense of gray, or at least to differentiate the wings from the true black of the head.

As I did that I found that I also wanted to change the water. So one thing led to another and pretty soon a largely dark print became a largely light print.
Posted by Ken Januski at 5:54 PM

I like your sketches and the painting of the robin, Ken. I've been sketching robins, myself, and have found many of them to be quite rotund, unlike the few I see in summer. I wonder if they're bulked up for winter. The birds I'm sketching are gorging on mistletoe and madrone berries. Hey, look at how All About Birds describes them:

American Robins are fairly large songbirds with a large, round body, long legs, and fairly long tail. Robins are the largest North American thrushes, and their profile offers a good chance to learn the basic shape of most thrushes. Robins make a good reference point for comparing the size and shape of other birds, too.

Out of curiosity I got out some of my reference books yesterday to see what they said. I expected something like long, deep-chested, long-legged, long-tailed bird.

My thought before looking at the guides was that they sometimes seemed rotund because of their deep round chest, but that they also seemed lanky because of their long tail. So the first guide I picked up, the new Stokes guide, said that they had a 'short-tailed' look. Short-tailed!!?? Had I been hallucinating all my life?

So then I looked at one of the newest Peterson's. No comment on the tail, but in looking at the illustrations, and the photos I'd taken, I decided that maybe the tail was actually shorter than I'd thought.

So now after your comment I pulled out the guide I really trust, Sibley. 'Long-tailed' he says. Out of curiosity I also just checked Birds of North American Birds Online. Like Peterson though they make no commitment to tail size. So I think the long-tails have it. But it does make you wonder why either there is no comment on tail size or differing opinions. And all for probably the most common bird in America!

Just goes to show you how much there is still to see and consider in the world around us.

I'm sure that you're right that they're also bulked up for winter, or in our case have their feathers fluffed out to keep warm. Sibley in his 'Birding Basics' has a great illustration of just the body of a bird, showing how greatly the appearance of the entire bird can change based on the feathers and also whether the bird is stretched out, scrunched down or whatever. A fascinating subject!!