Conjuring Up the Birds of Summer 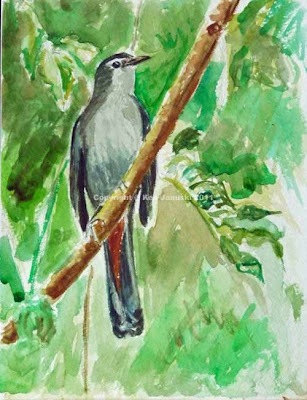 Yesterday I took part in the Philadelphia Mid-Winter Bird Census. I don't think it got above freezing all day and it snowed during the 2 1/2 hours that my group birded. What a beautiful day. There's something about being out birding in the snow.

But the birds didn't seem to agree. It was the smallest count I've been in during my five plus years of taking part in the census. My guess is that most of them were hunkered down, waiting for warmer, dryer weather.

One of the many pleasures of birding, particularly birding the same area time and again, is that you get to know what birds should be there, what birds you've seen on previous counts. A Lincoln's Sparrow there. A late Eastern Towhee there. There the lone Tree Sparrow of the year.

In much of the area we traversed yesterday I couldn't help think: hmm, well a Gray Catbird could still be here. They are everywhere in the summer, non-stop chatterers and squawkers. And one or two will occasionally still be around for this mid-winter count in Philadelphia. But I saw none yesterday.

One close relative though, another mimic, the Northern Mockingbird, did finally make an appearance where he's been in previous Januaries. It was looking unlikely then up he popped. That's the virtue of knowing one area, often called a 'local patch', well. You know what birds are likely to be there. So you spend the time to check that area. Yesterday it paid off.

I've not given up on printmaking. Just taking a break, slowly looking for new subject matter. Printmaking takes a bit more planning that paintings and drawings. So I'm spending a lot of time looking for something that strikes me as a promising for a new linocut. In the meantime this fairly quick watercolor of a Gray Catbird seen this summer.
Posted by Ken Januski at 4:57 PM