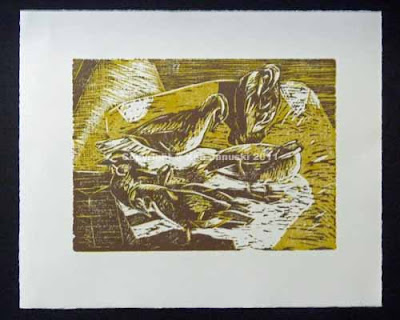 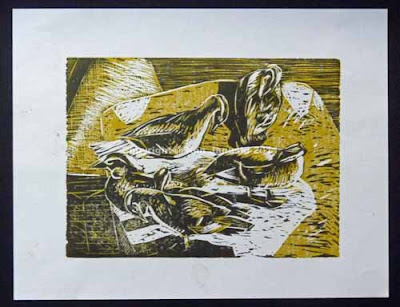 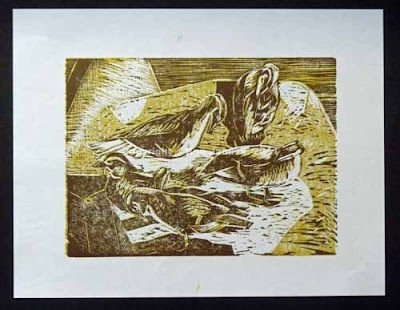 I spent much of yesterday carving out the area where color number two would print. Then I spent more time trying to decide on the actual color. As I said in last post I'm mixing colors in this print. So I can't go straight to the tube or jar. I have to mix the colors, make a test proof and see what I think.

At one point I decided I wanted a little green in the brown that was going to be the second color. Well my proportions were off and instead I ended up with the deep slate blue of photo number two above.

The problem was I loved it! The strong contrast with the white of the paper and the golden brown of the first color just looked great. The first color I tried, more of a burnt umber tin, is the final photo above. Though I liked it I much preferred the second darker, bluer color.

However if I kept it then I had to either make the Wood Ducks a darker, bluer color than they really were, or I had to go on top of the dark blue with a lighter brown color. This should work but would it? I wasn't sure.

There was one other reason to go with the dark blue. The darks, including the blue-black that lies ahead as a future color, are a very important part of the print. If I got them at this early stage then I knew I didn't have to worry about losing them. If a lighter color overlapped I could do a test proof, see that, and carve away that lighter area so the dark stood out.

This latter reason was a real temptation. But in the end I decided to do the unintuitive and use a lighter brown, trusting that I'd be able to put back the dark blue-brown on the third color. That is the print at top. It's on Rives BFK paper. The other two are just tests on copier paper.

For the future: the dark blue-brown, a blackish blue, probably some light blue accents on the wings. I'd really like to get a green tone in the water, as I actually saw. But for the moment I think that may be too much.

I was just reading Robert Bateman today saying that as he uses colors he may plan A, B, C and D. But he noted the same problem I did yesterday. Each color affects the next. So once I put down the color C it will change how colors A, B and any future colors look. Stay tuned.

One last thing. For me this is the exciting part of printmaking. I don't really know what will happen. I can just use my best judgment based on years of experience, then improvise if necessary.
Posted by Ken Januski at 11:54 AM