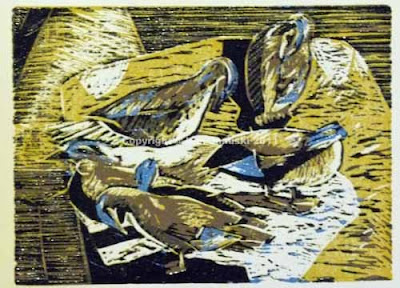 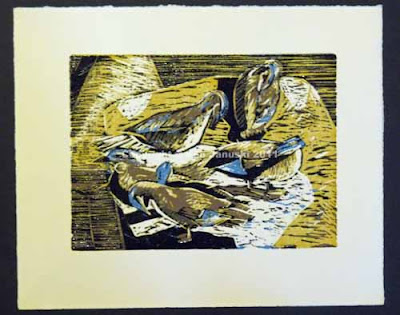 This seems like it's been a long haul. But I finally printed the final edition of 16 of the Wood Ducks seen along the Wissahickon this summer. There are a total of 5 colors in this reduction linocut.

By the time I got to the last color, the light blue, I found it hard to roll on the ink without getting it into areas I didn't want. That's because 95% of the block had been cut away. So there were only a few small areas to ink. Even with a small roller that I applied to each of the areas that needed to be inked some of it migrated elsewhere. This also was a surprise because those areas had been cut really deep, I thought deep enough that I wouldn't have to worry about the roller touching them.

All in all I'm happy with this though. It's taken some liberties but that's one reason I like linocut. It lends itself to taking liberties, to abstracting, to creating a higher contrast than might actually be seen. Not everyone of course uses this medium in that way. Robert Gillmor for instance is much more precise, as is Andrea Rich in her woodcuts. And yet I think both also tend to use the higher contrast that seems so natural to these media. Linocut and woodcut seem like the perfect blend of realism and abstraction.

The print is on Rives BFK paper, 9x11 for the full print, and 6x8 for the image itself. It is an edition of 16, printed with Gamblin oil-based inks.
Posted by Ken Januski at 5:12 PM

The blue is beautiful. A nice finish to this linocut. Thanks for showing and describing the progression through each stage.

Thanks Ellen. It's nice to get some feedback on it. The blue was a bit of a compromise. There is a often-hidden light blue on the wings, but the bluish sheen to the heads is actually darker. However I just couldn't convince myself to do two different blues in such small areas. So I compromised on just this one.

I'm sure for some people it's just a bit too much. But I'm happy with it. And happy to hear that you are too!

A beautiful linocut. Thank you for sharing the process, an interesting post.

Thanks Kathy. I'm glad that you enjoyed this post.