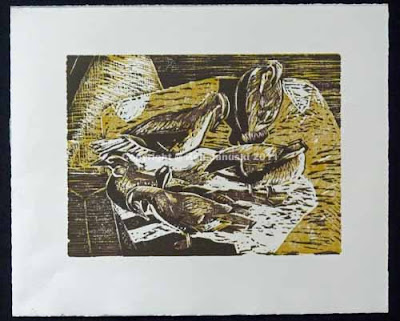 Though accepted wisdom in reduction linocuts is to print the lighter colors first I had some misgivings about this when I printed color number two of this Wood Duck linocut. I was somewhat afraid that I might lose some of the dark defining lines that were there if I used a lighter color second.

I've spent the last two days experimenting with color number three and cutting away more linoleum. Though there is a lot that I like about its current state at top, I do think I've lost some of those defining lines. So it's gotten harder to tell one duck from another. It's becoming harder to read though maybe more striking as just an abstract design of shape, value and color.

As I add colors problems of registration also become more apparent. I use a rough and ready system that has worked well enough so far. But it's not a finely tuned system. The original image I posted here showed some registration problems. I hadn't seen them when I chose it to photograph. But most of the prints are better so I've substituted the more successful one now at the top of this post.

One additional problem with reduction prints is that a lot of areas are now cut away. There is no way that I can go back in and add defining lines, well outside of carving a second block that is. All that's left to work with is the remaining uncut linoleum.

As far as the third color goes I spent a very long time testing before I finally decided on this one. The main problem was that blue or green looked better but brown was truer to reality. Eventually I ended up with this compromise.

Still to come are a dark blue/black for shadows and dark parts of the ducks, and possibly for the water and rocks under the water to the left, as well as a lighter blue for a few highlights, especially for the speculum, of the ducks. But only time will tell what colors actually make it into the print.
Posted by Ken Januski at 12:51 PM