Off to the Duck Races 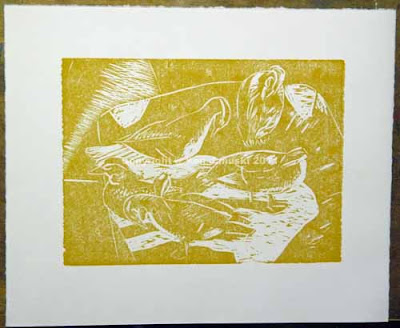 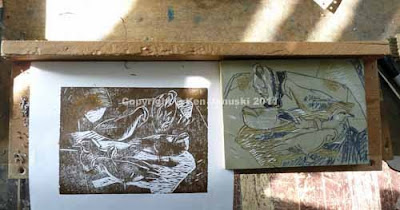 After a number of days doing sketches, thumbnails, watercolors of the immature and female Wood Ducks that I saw along the Wissahickon this summer it was finally time to get started on the linocut.

I began yesterday and decided early on that it would be a multi-color reduction cut. After I print each color that part of the block is cut away so it can never be printed in that color again. This is a lot of work but seemed like the best method for this scene. As it will only be my second reduction cut I'm not brimming with optimism but I'm not scared off either. Sometimes certain methods just inspire confidence while others inspire dread. I have confidence with reduction cuts. My guess is that this is because linocut is a rough, inexact and forgiving medium.

I'm also taking another new direction here: mixing colors. I mixed a couple colors in my reduction print of the Yellow-crowned Night Heron but basically I've stuck to out of the jar colors with linocuts. I'm so new to the process that I didn't want to add to the confusion by mixing my own colors. That changed here.

The print at top is the first color. It's a goldish brown, intended to be reminiscent of slow moving streams in the sunshine in summer. They're muddy looking, but also have a golden glow. Future colors will probably include a blue for portions of the wing, a green, or maybe blue over the golden yellow for some of the water, brown for the bulk of the ducks, and a black or dark blue/black/brown combination for the darkest areas.

As many have said though, color doesn't exist in a vacuum. All future colors have to work with the current colors. So once I start the second color I'll see how it works with the golden brown. My guess is that a fair amount of color changes will ensue.

I pulled 16 prints on Rives BFK paper today, along with 20 proofs on printer paper. I'm sure I'll run through those 20 proofs quickly as I try out future colors and cuts. I'm almost certain that 20 won't be enough. But 36 pulled prints today was more than enough for me to say: enough!

Who knows where this will go? But it should be exciting. We're off to the races

P.S. The second photos shows an earlier proof using a darker color. Only over time did I get what seemed to be the right color. The actual linoleum block is also there, both on my old woodworker's bench hook, which is ideal for holding the block as I cut it.
Posted by Ken Januski at 5:38 PM