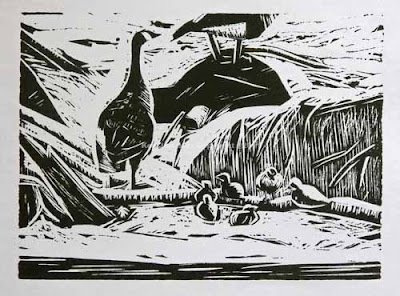 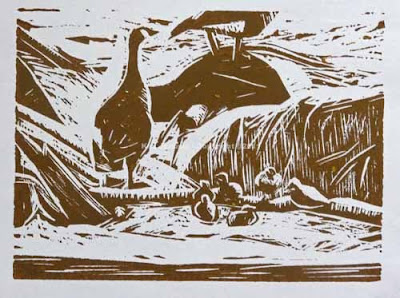 Just a quick post since it's been awhile. It was almost exactly a year ago that we saw two Canada Geese with their goslings lit by brilliant sunshine. It made the down of the goslings glow in such a way as to make them look as though they had halos.

I did a quick watercolor back then and this is based on that watercolor. I knew there would be one serious problem though. Light is best portrayed with areas of tone, as in watercolor. It doesn't work so well with lines. But linocut thrives on line, not tone. I know. But I finally decided to do it anyway. Sometimes you just have to take chances.

The two photos here are the exact same state of the lino. They're just printed in different colors. I had been using a burnt siena/yellow mix that gave me a bronzish color. I thought that would add to the sense of light. But on the last print I decided that maybe it wasn't working. So I printed the image again with some black added. So that's why there are two colors.

I"m going to let this sit overnight and probably will do some minor tweaks tomorrow. Then on to an edition.
Posted by Ken Januski at 4:24 PM