The Blues of Spring 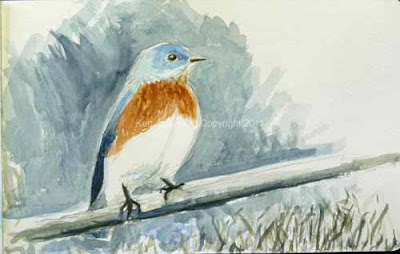 In the past I've written about the yellows of spring. The first flowers we see seem to be yellow. Right now our 'Arnold Promise' Witch Hazel is in bloom and is yellow. It's a cultivar of the native Witch Hazel. Also our Winter Jasmine is in bloom. It's yellow. I'm not sure how much longer it will be before we see the first yellow blooms on our Spicebush. It's one of the pleasures of late winter/early spring to see these yellows and sometimes pale greens.

One of the first posts in my proto-blog, a web site that eventually became this blog, was about the blues of fall. This wasn't so much because blue is a typical color of fall birds. It's not. But I did happen to see a number that day: Black-throated Blue Warber, Blue-Headed Vireo, Great Blue Heron.

But I've never written about the blues of spring. Until today. Yesterday we saw a pair of Eastern Bluebirds at Morris Arboretum. Though bluebirds are often in Philadelphia through the winter these were the first we saw this year. As they were around a nest box we hope that they'll nest there. Our only other first birds of the year yesterday were Brown-headed Cowbirds. You can guess which we were happier to see.

I started a field sketch of the bird at top. But as soon as I did he flew. So I and my wife decided to have our lunch of bread and cheese. As soon as we did the male came back and sat so that he was focused in the scope. But I knew if I put my lunch down and tried to sketch he'd fly. So I kept eating and he kept sitting. Ten minutes later I finished and started to sketch. Whoosh! Gone again.

About 10 minutes later I took some photos nearby of the same birds. One of them eventually became the source of this watercolor.

Unlike my last field sketches of Belted Kingfishers and Painted Turtles I just couldn't convince myself to to a complicated composition here. The birds are just so beautiful in themselves that I decided to keep it simple.

Appropriately enough Corey over at 10000 Birds had a post on the Eastern Bluebird and John Burroughs' poem celebrating it today.
Posted by Ken Januski at 12:10 PM

Thanks for the link.

And I wish I had the ability to draw or paint...nice bluebird!

Rick, Matty and I spent an afternoon with two bluebirds this weekend also! Love your painting of him...and your style. It's beautiful.

Thanks Corey, Kelly. Looks like it's definitely the time for these handsome and welcome birds.