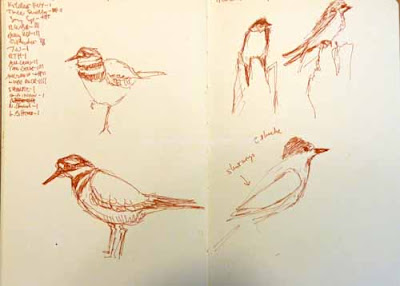 This time of year is always First Of Year time, first birds of a particular species seen in any given year. Some might also call it spring. It surely is indicative of spring.

Though Icterids, the blackbird family, are the true FOY migrants in our part of the country they're not quite as closely associated with spring, perhaps because they arrive before there are any other real sings of spring.

But Eastern Phoebes, Tree Swallows and Kildeer really do signal the start of warmer weather. I and my wife Jerene often go out in search of FOY birds starting in early March. I used to also bring my camera, take photos, and then do artwork based on them. I couldn't wait to get the photos developed and then do some paintings based on them.

But today I really wanted to force myself to do field sketches first and photos second. That's exactly what happened. And the birds cooperated. All except the four Eastern Phoebes. You would have thought with four of them that at least one of them would have sat still long enough for me to sketch one. But no. The best I could do was get part of one, then hope that another view of him or one of the others would allow me to complete the sketch. That's how this Eastern Phoebe got down on paper.

For some March is the thrill of March Madness and the Road to the Final Four. I used to enjoy that. But now it's easy to skip that in favor of getting outside on a sunny but brisk day like today, seeing the first migrants of the year and getting them down on paper. That is the true March Madness.
Posted by Ken Januski at 5:47 PM