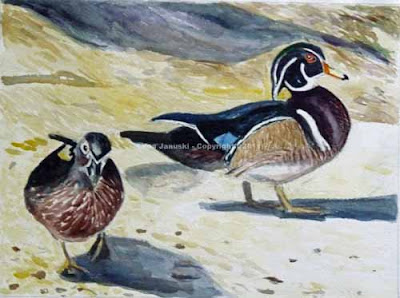 Hypnosis. There are certain bird species that are just so beautiful in themselves that someone looking at them, and in particular someone trying to portray them, can get hypnotized by their beauty. I had this experience when we drove by our first Ruffed Grouse in the Dolly Sods Wilderness Area in West Virginia last fall. I guess it was fortunate that I was driving and didn't have my camera at the ready. Otherwise I would have tried to get some photos and then eventually try to render that in some artistic medium. The problem, as with the male Wood Duck, is that you get hypnotized by the complex patterning and often end up with a lifeless artwork.

Far more important in wildlife art, or any art really, is getting a sense of life. If you can get the sense of life AND intricate detail and pattern fine. If not my feeling is that you should skimp on the detail.

I saw my first returning Wood Ducks in Philadelphia a week or two ago. But over the last few days I've seen them in numbers, between 12 and 18 altogether on the Wissahickon is an educated guess. 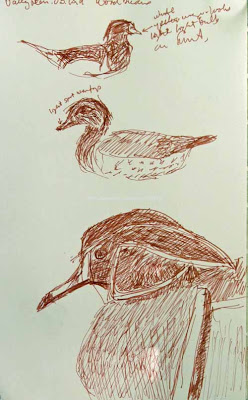 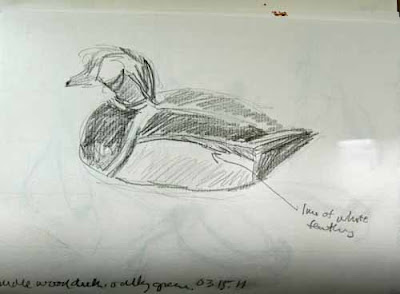 One of the hardest parts of wildlife art, especially bird art, is capturing the subject on paper before it moves. Both Tim Wootton and Nick Derry emphasize in Tim's new book mentioned in my last post that most of your time should be spent looking, not pushing the pencil around the paper. So with that in mind I resolved to put in into practice over the last few days.

But it ain't easy! Ducks are perhaps more difficult, at least if they're being whisked out of sight by a current, but Wood Ducks are even worse. My brain almost short-circuited as I tried to figure out what I was seeing, make a visual memory of it, then put it down on paper. Even on the less gaudily patterned female that huge eye spectacle complicates things vastly. I often end up with a blob with a weird eye in the middle. My attempts at field sketches are above.

The end result was that I also took photos. And when I got home I decided to try a larger, ca. 15x11 inch, watercolor based on the photos. But I ran into the exact problems that I expected. The pattern of the ducks, especially the male, is so complicated, and beautiful, that I concentrated on it above all else. I did this even knowing of the danger. But that's one problem with photos. If it's right in front of you you're sorely tempted to just put it in. In the field you can't do this. You have to make quicker, and probably better, decisions as to what to keep and what to skip. 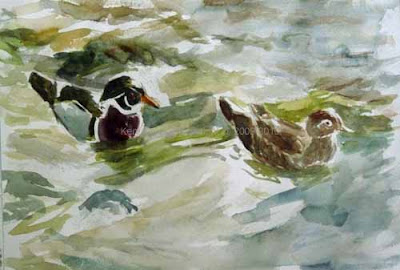 I think I resolved this successfully. But it's interesting to compare it to the first wood ducks of the spring that I painted last year on almost the exact same date. I also did some horrible field sketches that day. This is based on a photo. But in that case I didn't worry about detail. I was more concerned with the overall painting. In some ways I prefer it.

But enough of art theory and practice. It's always happy sign of spring and summer when the Wood Ducks return. I kept thinking there was an abundance of American Goldfinches yesterday at the Wissahickon also. And then I realized it was the squeak toy greetings of the Wood Ducks.
Posted by Ken Januski at 10:21 AM