Elegy for a Junco 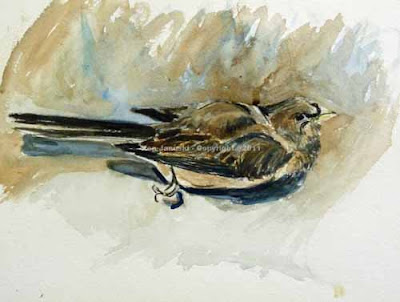 Last Sunday I intended on doing some final tweaks to the geese and goslings linocut and then printing an edition. But when I stepped out the front door I found a dead junco on the sidewalk.

Though most bird art, at least western bird art, had been based on dead specimens until at least the mid nineteenth century and the invention of photography, I've never worked from a real specimen, either my own or that of a museum. But obviously it's a long and honored, not to mention necessary, tradition. It's surprising to read about John James Audubon going out hunting for specimens and talking about having a good day hunting. But that's the way most bird art, or naturalistic, scientific study has been done. We tend to forget that with our high powered optics, whether in binoculars, scopes or photographic equipment.

So, sad as I was to find a dead junco, I still decided to bring it into my studio and do a drawing or watercolor of it. The result is at the top. It was informative in that I could really see how the bill is built, how the feather tracts lie, etc. Recently I read that dead birds shrink in size so that my partially explain why it seemed so astonishingly small when I picked it up. Largely though I think it's just that birds are really small. That makes their migratory accomplishments all the more impressive.

In any case I was happy to have the opportunity to portray this unfortunate bird. 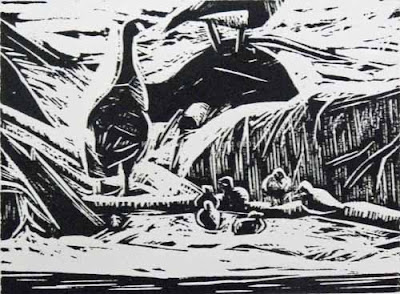 On Monday I finished tweaking the linocut and printed an edition of 12 on cream Rives Lightweight paper. Most of the copies are for sale at my etsy site. I'm still not really sure what to make of etsy. At times it seems that it's hard for anyone to ever find anything. And yet many people, mainly crafters, do seem to sell a fair amount of work. Fortunately there is the printsy blog site that lists etsy members that are also printmakers and members of printsy. That's at least a starting point for finding prints there. Printsy also includes interviews with printsy members, including yours truly, selections of new work, and occasional tutorials. I think I might not have tried etsy if it weren't for printsy. As it is I have a few non-print items on my site but soon it will be only prints. All of my work is available for sale at my primary online store. But I thought it would be interesting to try etsy and to have more inexpensive works, specifically prints, for sale there.
Posted by Ken Januski at 12:05 PM

To me this is a lovely painting, and the bird looks more like it is resting - I don't think I would have known it was painted from dead if you hadn't said. Interesting to hear about your etsy experiences - was wondering about putting things there myself.

Actually the junco looked very alive even when it was right in front of me, except for the flatness of the eyes, both in shape and color, and the odd way that the legs were positioned. I did make sure that I tried to keep the eye flat.

I think it's so difficult to sell work online as an artist. There is no really good solution that I know of unless you're represented by a good gallery which will do the online work themselves. I'm unhappy with the size of my images at my main store but like other aspects of it. But I pay more than I'd like. Still when I do sell all of that processing is taken care of very well. One nice thing about etsy is that price to list things is very low and only goes up when you sell something. So that seems good. And the pictures are big enough to actually see something, unlike my store. But when I check to see what new prints are being put up it seems like there is one a minute or so. It's amazing how much stuff is listed, of all sorts of quality. That's just for prints. I haven't really followed anything else, except watercolor a bit. I'm not sure how anyone ever gets found and sells anything but they certainly do!