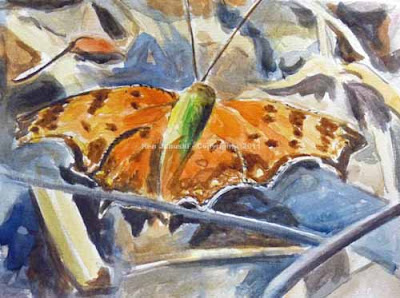 I was tempted to title this 'Painting More FOYs' but realized that not everyone recognizes the FOY acronym. It stands for first of year, and usually refers to the first example of a particular bird species seen each year. So each spring birds like Eastern Phoebes are FOYs in March, at least in Philadelphia where I live.

But I don't want to get lost in birding lingo. So I chose the current title. My first reaction when I think of 'painting spring' is a landscape in light greens, yellows, maybe pinks. Or at least some foliage or flowers in those colors. Spring is often first seen in the changing of dull gray and brown vegetation to brighter colors.

What about the brilliant orange of the Eastern Comma seen above though? Isn't it an example of spring? Yes it is along with other butterflies, moths, insects, birds, frogs, etc. For me it's these members of the animal kingdom that are even more indicative of spring. The Eastern Comma, which I always confuse with the Question Mark, first appeared a week or two ago at Morris Arboretum. Yesterday we saw another one, along with our first cabbage moth of the year. So this is probably my first attempt at a butterfly in watercolor. I also did a live field sketch yesterday, but like a bird the butterfly flew off after I'd barely gotten started. 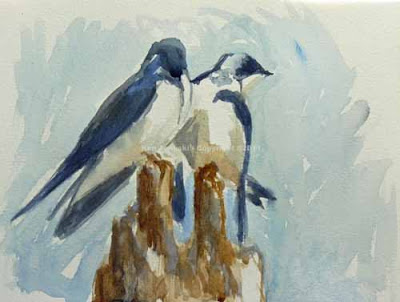 We also saw about 10 Tree Swallows yesterday. It was hard to get an accurate count because they swoop by so quickly and travel large distances on each exuberant swoop. We never really saw more than 6 in front of us at one time. But seconds later we'd see a few more quite a distance away. We're they the same or different. My best guess is that at least some were different. So I came up with 10 as my best guess count.

Tree Swallows are also some of the first birds to arrive each spring. This painting is based on a photo that I took a week or two ago, also at Morris. But unlike the watercolor of the Eastern Comma, where I tried to be meticulous and spent hours on, these Tree Swallows were done in 15 minutes. A flash painting.

I've posted this type of painting numerous times in the past. I guess it's a bit like a 'gesture drawing', where you have less than a minute to draw something, generally a human model, in a pose. The virtue of this type of drawing or painting is that you have to simplify, almost have to feel and empathize with what you see, rather than think about it. I love these types of drawings and paintings. They're almost always lively. They have a sense of life, unlike more detailed paintngs, which can get many of the details that you might find in a photo, but lack any sense of life. In any case I've been at a bit of a loss as to my next subject for a print or painting. Flash paintings always help to get me over the hump and onto something new. And when you're doing them you feel a bit like a swallow in full swoop, confident that you won't belly-flop into the water.
Posted by Ken Januski at 12:57 PM