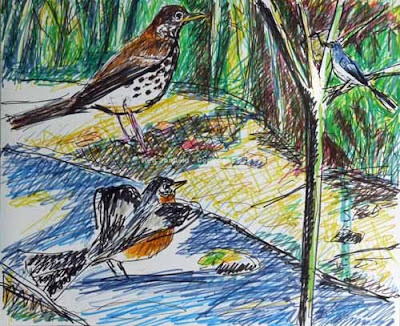 I hate to let the Blackburnian slip out of the top position in this blog but life, and migration, moves on. And today was the day the Wood Thrushes returned to Carpenter's Woods in Philadelphia. I went looking for warblers and other neo-tropical migrants since warm weather seems to have dumped them in huge quantities throughout Pennsylvania over the last few days.

But no warblers today. That's okay though. Sometimes there are so many new birds it's hard to appreciate any of them, sort of like trying to see Rome in a day. It's hard to believe that Carpenter's Woods is ever quiet. A major road one side, renegade leaf blowers seeming to run non-stop on all other sides. Sometimes I'm surprised I can hear anything there. But there were moments today when it was quiet and all I could hear was the rich, almost orchestral song of the newly arrived Wood Thrush.

The thrushes often sound like flutes, which do indeed have a rich sound. But it almost seems to be cheating Wood Thrushes to say that they just sound like one instrument. They are so rich I think it's better to liken them to an orchestra.

When I lived in San Francisco many, many years ago there was always someone down near Ghirardelli Square and Fishermsn's Wharf advertised as something like a one-man band. A walking box with a person inside that spat out just about every sound you can think of. At least that's my recollection. Of course there is an avian equivalent - the Gray Catbird. Many of them have also been back for a few days, yackety-yack, yackety-yack. Still it's nice to see them back. Soon they'll be in our own backyard, scarfing down the blueberries.

Some readers may remember my Wood Duck watercolor of just a month or so ago. I've not done anything that detailed since. And in the work at top I've really gone quite far afield. But I really do prefer liveliness, a sense of life, to something that looks more like a well-rendered photograph.

Today along with the Wood Thrush I saw an American Robin bathing in the small stream, then raising his wings up and shaking off the water. I also saw a familiar spring sight, a Blue-gray Gnatcatcher picking apart a Tent Caterpillar 'nest' for nesting materials. I did quick sketches of all of these today. They are not great and I'm not going to show them.

But the very act of trying to sketch these scenes makes it easier to do a painting based on them. I've taken the first step. The other steps are easier. So this is a felt tip pen sketch of a composite of thrush, robin and gnatcatcher. I think it captures at least some of the excitement of being out today. I hope Eric Ennion would commend me.
Posted by Ken Januski at 2:52 PM