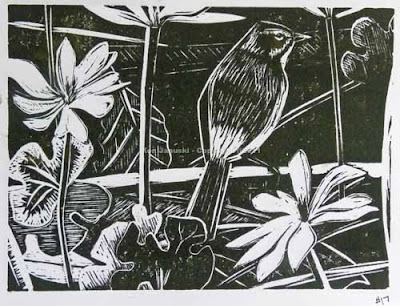 I'm not on Facebook. I don't use Twitter. In fact I can't fathom how anyone in their right mind would. Aren't there enough distractions already? But I'm not a Luddite. I wasn't exactly an early adopter of the internet but I do remember using Gopher to sort of browse the not yet existent web. I was thrilled to get into a library at Harvard, the Fogg Museum Library I think. And I remember sitting in front of my computer in disbelief the first time I accessed a computer in another country, all before WWW was invented.

I'm sure that Facebook and Twitter are old hat to some and they're on to new hot stuff. And soon it will be passe too. Technology moves at an inhuman speed. But I'd like to announce my own gift to those seeking the cutting edge (please excuse the biggest cliche of the last 100 years outside of 'pushing the envelope' or 'breaking boundaries): The World Wide Guinea Pig!

One of the tenets of the open source movement in technology is that what you make doesn't have to be perfect when you make it available to the world. Many, well hopefully many, users will tell you what's wrong. Or fix it themselves. So there's constant feedback and things get better. I find a similarity between putting out software that's not yet perfect and displaying art that may not yet be quite done.

I'm obviously exaggerating things when I say I've developed a new cutting edge technology. But it is something that works for me: putting a version of a new painting or print up on the web so that I can get a different view of it. As I've mentioned before it's also a false view: the light behind any images on a computer screen make the image more vibrant than any painting or print can ever be, unless it also has a light rigged up behind it and is painted on a transparent material. So I know that part of what I see will make it look better than it really is.

But many if not most artists have a very hard time 'seeing' their work. I know this sounds hard to believe but it's true. I think we get so close to it that we can no longer see it. That's why artists often look at their paintings in mirrors: so they can get another perspective. I've never done that. More likely I'll leave the room and come back, hoping that that first new view will make me see my work differently.

But today I have the World Wide Guinea Pig: this blog, or my web site, or the Wildlife Art thread at Birdforum. All of them allow me to see my work fresh. I also could just put the image on the computer and look at it there and never actually put it on the web. The end result is the same in that I see it in a new perspective. But the web also offers the odd chance that someone might make an interesting comment on the in-progress work.

In any case all of this is just a prelude to saying that I've spent much of the day going through 10 more versions of the Palm Warbler in Bloodroot linocut. Version 17 is at top. I'm posting it because I'd like to get another view of it. And also in case anyone is interested in the progress in the lino.

I think it's getting much better organized. I'm not yet sure how much I have to do. I'd like to finish it by tomorrow in order to enter it into a competition. I'm going to include a few of the earlier versions from today below. Most are in the same color ink but I did do a bit of minor experimenting along the way so you may notice some color differences. 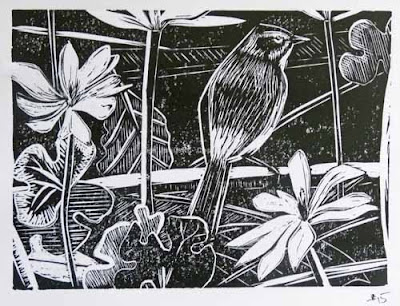 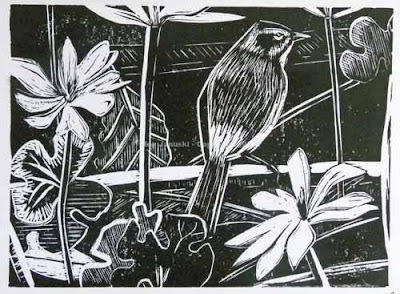 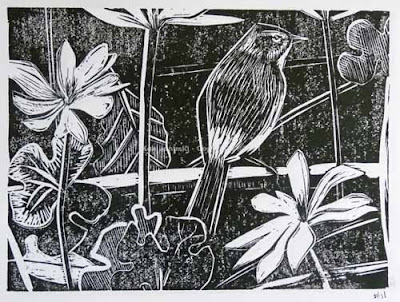 It was also such a beautiful day today that I couldn't resist searching for some migrants, and sketching them, today. I did see a couple more Palm Warblers and that reminds me that I do need to make sure that this can't be misread as a Yellow-rumped Warbler, a bird I also saw today. The eye-ring and bright rump might lead to some confusion. One more thing to think about as I finish this off.
Posted by Ken Januski at 4:46 PM

Watching and waiting for the moment when you decide it's done

Hi Mike. Nice to hear from your! Well I did two more versions and tweaks after I posted this yesterday and envision at least one more for today. I think in any other medium there wouldn't be so many versions but you really have to print a lino in order so see what your changes actually look like!

Didn't post this on birdforum because I don't want to overpost there. But I will post the finished version there when I finish this. Hopefully soon!!