Documenting Cuckoos and Other Migrants 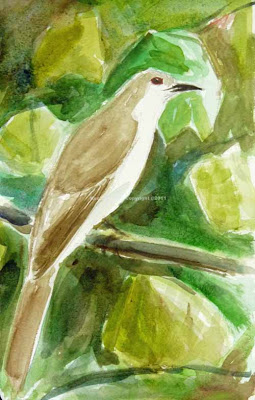 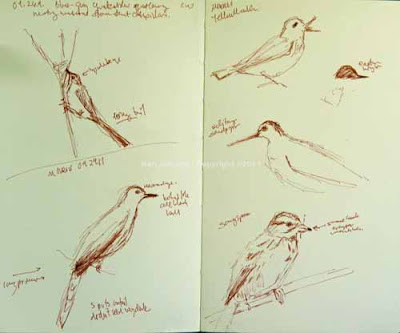 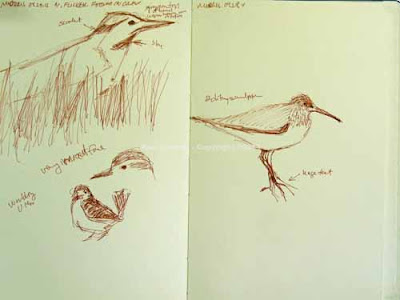 It was a little less than a year ago that I documented my email to the PA Rare Bird List about an immature Yellow-crowned Night Heron by showing photos and field sketches on my blog. Today I'm doing the same thing but this time with a Black-billed Cuckoo.

I probably should have written the blog post before posting to the list but didn't think to do that. In any case here are some field sketches from today. First page shows a not to hot sketch of Blue-gray Gnatcatcher taking nesting material from Tent Caterpliiars and the Black-billed Cuckoo on the left hand side. On the right a singing Yellow warbler, just the head of an Eastern Kingbird, a Solitary Sandpiper and a Song Sparrow. I was struck by the little curve at the tip of his bill.

Second page shows a Northern Flicker in grass. It was hard to sketch him because he kept disappearing behind grass. Below him a Warbling Vireo. And on right another attempt at the Solitary Sandpiper.

There are two types of field sketches here: one is based on a bird I'm looking at through a spotting scope, e.g. the flicker and sandpiper. The others are birds that I looked at in binoculars, tried to get a mental image of, then drew. I did this with both cuckoo and vireo. In those cases I often know that the bird will be gone before I get the scope on the bird. So I continue to try to refine my ability to memorize what I see, a technique much espoused in Tim Wootton's new book 'Drawing and Painting Birds.'

This latter technique isn't foolproof. Sometimes I just don't remember everything correctly, especially things just seen for a split second, like the Warbling Vireo looking over his shoulder, possibly preening.

In any case that's the story on these sketches and the Black-billed Cuckoo. Things I did note on sketch that may not be legible are that the bill was black and eye red. I'm not sure I've gotten everything else correct.

After posting this I decided to try a quick watercolor of the bird. It's based on the field sketch with help from a couple of photo bird guides and my one personal photo of a Black-billed Cuckoo. One problem with painting them is that they are a bit drab: the bright red ring around black eye is the only exciting area. Otherwise just a drab, though beautiful brown on top, and a clean white/cream below. Though I showed tail spots in sketch I really couldn't see them well. The tail was more in profile so I used went back to that in painting. But it was hard to get the background of sycamore leaves, which is where he was, to work with the subtle colors of the cuckoo. I think that they overpower the bird a bit. So some other time perhaps I'll try this again. For now though it's my documentation for a first of year Black-billed Cuckoo.
Posted by Ken Januski at 4:08 PM

Hi Ken, I love your posts, especially in Spring, as I know that the birds you are drawing will soon be here. And you pick all my favorites: blackburnian warbler, wood thrush, black-billed cuckoo. We usually have both cuckoos, if for a brief period, each year. The cuckoo's long tail and interesting call adds a bit of drama to their sightings.