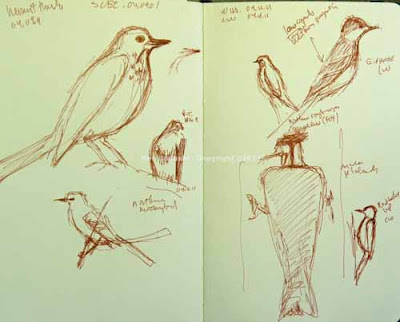 In case you're wondering, no, I'm not referring to myself. I don't feel abysmal and though I'm not the most social of animals I wouldn't consider myself a hermit. No the abysmal hermit the title refers to is my new attempt at a watercolor of a Hermit Thrush earlier today. I'm not going to show it. I used to show some of my failures because I thought this might be useful to others. Art is as much about failure as sucess. But this one is just so far below par that I'm leaving it.

The reason I'm posting at all is that it was just two years ago on April 19, that we saw Hermit Thrushes while out birding at Fort Washington S.P. then came home to find another one in our backyard. I posted about it here. Last Friday we saw three and perhaps four at Schuylkill Center for Environmental Education. They were the first we'd seen this year. Then today we spotted another in our backyard.

Given that we have a small urban backyard and each year the neighborhood loses more big trees I'm always astonished when we get any migrants. So I thought I'd celebrate with a quick watercolor of a Hermit Thrush, just like I did two years ago.

I based it on a field sketch I did on Friday. That's at top, along with a Red-tailed Hawk, Northern Mockingbird, Northern Rough-winged Swallow, Eastern Phoebe, Pileated Woodpecker!!, and a Red-bellied Woodpecker. The rest of the birds were also seen during the last few days.

One thing I realized in the Hermit field sketch is that the angle of the bill is always very important. It may not seem like it but I think it often is much of what gives a certain personality to a particular species. This seems especially true with thrushes. You can see that I struggled to get it right but never quite made it. So I was hoping to correct that in the watercolor. But not in this watercolor. Maybe next time.

My next project will most likely be a linocut of the Palm Warbler amidst the Bloodroots, or perhaps one of the Pileated with some Trout Lilies. The Pileated is one of our favorite birds. 18 months of not seeing one was a very long dry spell. I'm glad it's over.

One other note. When we saw Trout Lilies at SCEE last Friday they had just come out of the ground. There were no flowers at all and the leaves weren't more than three inches long at the most. Then yesterday I saw thousands of them along Forbidden Drive at the Wissahickon, just about three miles away from SCEE. The oddest thing is that I would guess SCEE gets more sun not less. So you'd think those wildflowers would be ahead of the ones at the Wissahickon. In another life when I have more time I'll have to explore this more. In any case it was great to see them in full bloom. Like Bloodroot they are striking in both shape and color, just crying out to be put into a painting or print.
Posted by Ken Januski at 1:13 PM