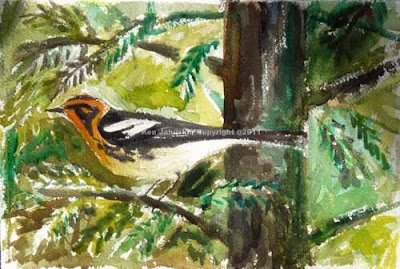 I think the title says it all: an Easter with a celebratory Baltimore Oriole, or American Redstart, or least likely of all a Blackburnian Warbler.

I'd seen a Louisiana Waterthrush in Philadelphia on Friday. I know that they breed here, at the Wissahickon, near where I often bird. But I've rarely seen them. And I'd like to. They're one of our favorite warblers. On Friday I went a few miles further north than I normally do at the Wissahickon and sure enough I heard and saw a waterthrush. Someone I met said that they were often in that area all summer.

So I thought we'd get out today before the rain came in and give Jerene a chance to see it. We did and it was a great thrill. Later we saw another one a few hundred yards away which may or may not have been the same bird.

Further on we stopped to try to track down a first of year Yellow-throated Vireo, another of our favorite birds. We heard it but couldn't find it. Then amidst at least 10 Yellow-rumps Jerene spotted a different bird but couldn't get the words out, much like the time a brilliant Rose-breasted Grosbeak landed in the feeder next to our kitchen window.

Finally I heard Baltimore Oriole, no BLACKBURNIAN! Sure enough there was a male Blackburnian warbler in full breeding plumage not more than 15 feet away. He stuck around for at least 15 minutes. Then further down the trail we spent another 15 minutes with either him or another male Blackburnian. If you ever see one up close, and aren't color blind, you know how striking they are. That golden orange or sometimes fire engine red throat is just unbelievable.

I didn't bring my camera and I'm happy I didn't. Again I was forced to look at the bird and didn't waste time trying to get photos. The field sketch I did was not very good. But it noted many of the salient aspects of this beautiful warbler. I hope I've gotten them down in this quick watercolor.

Blackburnians love hemlocks. a dying species in much of the eastern US. They're a fiery jewel in the rich black and greens of hemlock needles, branches and truck. I've tried to capture that here. All of the background is from my imagination and memory.

P.S. One of the very first bird paintings I did, before I was experienced to realize how little I know about birds, was the painting that serves as the header for this blog: a Blackburnian. In it I took great artistic liberties with a photo that I'd taken of a Blackburnian in Shenandoah National Park. It was/is bold, really more abstract than realistic. But it captures the boldness of a Blackburnian. Today's watercolor seems a fitting counterpoint to it. Same bird just slightly more realistic in rendering.
Posted by Ken Januski at 5:51 PM