Palm in the Bloodroots 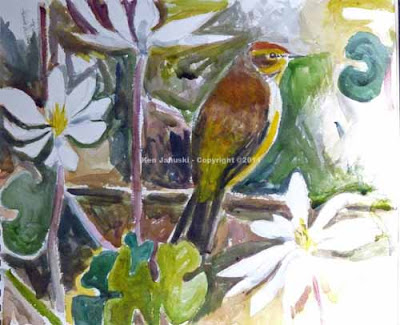 Yesterday Jerene and I spent over five hours enjoying a perfect spring day at the Schuylkill Center for Environmental Education. Sunny but cool. A perfect brisk day. Wildflowers were starting to flower: bloodroot, which we also grow in our yard, with its pure white flowers and foliage that looks like it comes from the best abstract sculptor in the world; bluebells, just starting to bloom; wake-robin; and trout lilies just starting to show their beautiful speckled(like a trout) straplike leaves.

We saw at least three Hermit Thrush, our first of the year, as well as our first Eastern Towhees. We saw just one warbler, a Palm Warbler. Unlike most warblers he just sat there. I knew he wouldn't do this though so I didn't get out my sketchbook and try to sketch him. I'd learned my lesson on that score at Carpenter's Woods on Friday. So what does he do? Just sit there for five or ten minutes. So I took quite a few photos.

Palm Warblers are generally the first warblers I see each year, even though Pines often arrive earlier. I just don't see too many of them though. But Palms are a little more common, often walking through another wildflower that looks like it might have been designed by an abstract sculptor, the Mayapple. It doesn't reach the abstract heights of bloodroot but it's still very attractive.

For years I've thought about combining a Palm Warbler and some Mayapples in a painting. But seeing all the Bloodroot yesterday made me want to try something that might even make a stronger painting: Palm Warbler and Bloodroot. I never saw such a scene. But it's not all that unlikely.

Given all of the good photos I took yesterday there was a great temptation to just paint a more realistic version of a Palm based on a photo. But I really want to pursue using my field sketches as well as making up composite scenes, not being limited by what photos give me. So that's what I did here.

It started well, then fell apart. I was about to toss it; or just give up on it when I decided to try just a bit more work. Mainly I added darks to try to tie the whole thing together. I think it's somewhat successful.

In any case it's successful enough to convince me to continue in this direction. I'd like to show greater imagination in my art.
Posted by Ken Januski at 6:02 PM