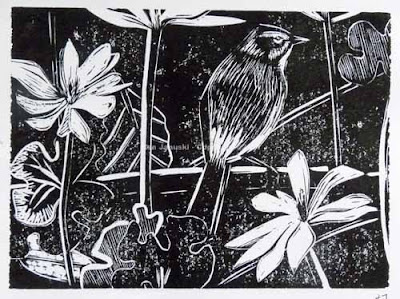 I decided to use the Palm Warbler in the Bloodroot as the subject for my next linocut and began it yesterday. It's been awhile since I've shown the progress of a linocut so I decided to take some photos of some of the versions so far. At top is version 7. 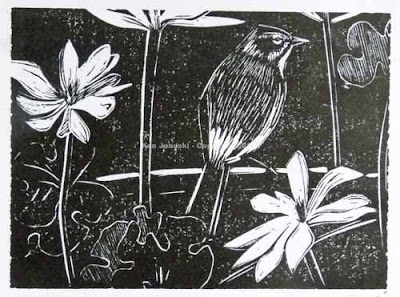 Above is version five. You can see I've added a fair amount of complexity. Based on past experience I'd guess that somehow or other i'll simplify this now that I've gotten in complicated.

There are three balls that I'm juggling in this print: being true to the Palm Warbler, being somewhat true to his surroundings, especially the Bloodroot, and finally making a visually exiting print. These three goals often fight with one ahother. I won't go into any detail except to say that I always need to make some compromises. And I also need to take some chances. For instance when I decided to make the bold marks of the veins of the oak leaf I realized that though it might be accurate it might also make the print too busy visually. On the other hand maybe it will both be realistic and visually exciting. That's the beauty of art and prints. You take a chance, using your artistic intuition, and hope for the best. 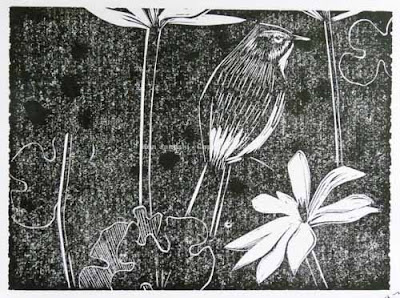 Above is version number three, a fairly early version that shows the print starting to take shape. One thing in it is a lot of blank, black space. That is one thing that I realized early on I would need to fill. Just how I'm still not sure. Again this is part of the artistic compromise. I could just leave it blank and let the focus be on the warbler and bloodroot. But that wasn't what I saw. Both bird and wildflower blended into a complex scene. So I'd like to show some evidence of that without creating a jumbled mess. 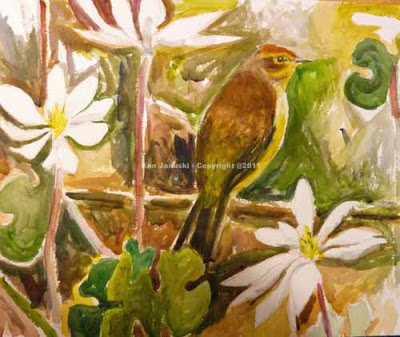 And finally a better photo of the watercolor that I also did of this same scene. The print is based on a printed copy of the watercolor. I traced it onto the linoluem block and then started improvising.

I have no idea how this will work out. At this point it really needs do get organized and simplified in some way. But there is still too much flat black as well. So a combination of complicating and simplifying lies ahead. Also the curvilinear shapes fight with the straighter more geometric shapes and marks. That too needs a resolution.
Posted by Ken Januski at 1:14 PM