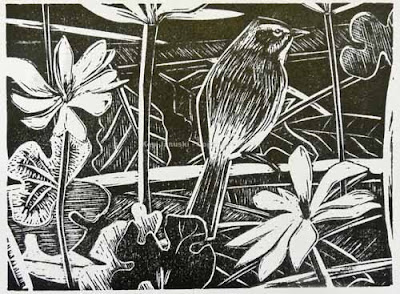 Well this has been a long print, especially for one that's black and white and doesn't have the complications of reduction color prints! Perhaps it took so long because I had high expectations for it, and because I wanted to get it done in time for a competition. In any case here it is.

One of the things I'm happiest with is that I was able to construct the scene from my imagination and other sources. But I never really saw this scene. I saw the Bloodroot, as well as the other leaf litter, and I saw a Palm Warbler, but never together in a scene like this. I sort of got it working in the earlier watercolor but I think it works much better and is more cohesive and believable here. I do thinks that's a virtue of pursuing the same subject in different media. You get to refine the idea. Of course if as a viewer you didn't like the idea to begin with you might have a different idea about repeating the theme.

One other thing of note. Linoleum cut really lends itself to line. So it's very tempting to put outlines around objects. This can flatten them out, like cutouts, especially if the outlines are wide. But you can also use line for hatching, something that etching and engraving excel at. But this use of line tends to create a sense of volume, just the opposite of a bold outline that counteracts volume. This print has some of both. At one point I did partially remove a bold outline on one of the Bloodroot leaves at lower left. It just made the entire print look too flat. On just about every print I do it seems that I fluctuate between flatness and volume, bold, graphic line and more subtle, modeled hatching. There's rarely a clear winner. But I hope that the print survives the battle.

One distraction while doing this print was backyard migrants, particularly a Hermit Thrush, and migrating warblers and other birds at Carpenter's Woods. Yesterday was so nice that I had to abandon the print early in the day and do the following field sketches. 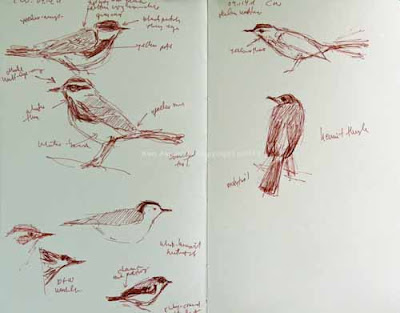 The left hand page includes two first of year Yellow-rumped Warblers at top and a first of year Black-and-white Warbler, White-breasted Nuthatch, and one of many Ruby-crowned Kinglets below. On the right hand page another Palm Warbler and another Hermit Thrush. I didn't use a scope on any of these. They were all based on just looking at the birds in my binoculars, as long as they stood still that is, and then trying to get down on paper what I'd seen. I feel like I'm definitely improving in this direction. I hope this will finally be the first year when I can do some decent field sketches and perhaps even field watercolors of the neo-tropical migrants, especially my favorites the Wood Warblers.

Oh yes, the print is an edition of 12. It is 6x8, or 8x11 with print borders. Gamblin oil-based ink on Rives Lightweight paper.
Posted by Ken Januski at 3:45 PM