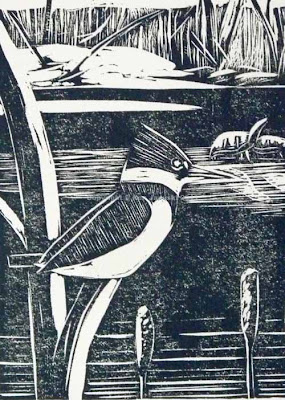 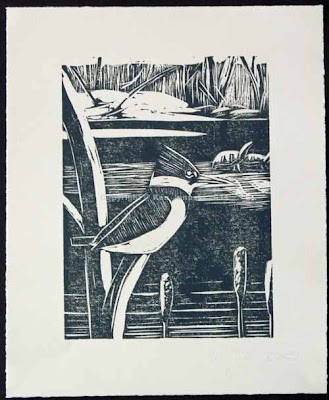 It's hard to believe that it was only 10-14 days ago that I did field sketches at Morris Arboretum of Belted Kingfishers, Painted Turtles and Snow. Since then I've done one wash drawing based on this scene as well as one more fully developed watercolor. Today I finished a linocut on the same theme.

This print is 9x12 inches for the entire print, 6x8 inches for just the image. It's printed in a dark slate gray, though it may look black in the photos, on cream Rives Lightweight paper. It's an edition of 12.

I've titled this post as I have because it all came about because of my field sketches. Often when I'm out people will look at them, see that they're not fully developed, and I suspect sort of write them off as scribbles. But for the artists I admire they are the richest sort of material you can find. Photos don't hold a candle, not even a cheap wooden match to them. I've written about this many times so there's no point in repeating myself. But I did think the work I've done based on those small sketches is a good illustration of my point.

I did do something different with this print. I used transfer paper to trace the outline of the last watercolor onto the linoleum block. In the past I've used my own primitive makeshift methods that give me a rough skeleton to improvise on. The one problem is that sometimes the lines don't have th sureness of the original drawing, sketch or watercolor. I'd prefer to just carve into the block while looking at my original work. But relief prints print in reverse so if I copy what I see I'll actually get a print with everything in reverse. Thus the need for some sort of transfer method.

So finally I broke down and bought some transfer paper. Only problem: the print came out in reverse. To make a long story short this print is actually a reverse of the last watercolor. Normally I wouldn't want to do that because often such reversals just look wrong. But in this case I think it did not harm it. And it was too late to do anything anyway.

I also was tempted to do this as a reduction print, using more than one color. But I finally decided to keep it simple. But there still may be a multi-color reduction print on the horizon.

Lastly I'm very happy having captured this unusual scene: snow, basking turtles and a Belted Kingfisher. That's the type of thing I aspire to.
Posted by Ken Januski at 3:48 PM

...wow...the kingfisher linocut is gorgeous, and I loved seeing the progression from sketch to watercolor to the final linocut. It's amazing how you can boil the image down to bare bones...so much talent and study.

Ken -- I am becoming a bigger and bigger fan of your linocuts. The kingfisher is terrific. I'm not sure what interests me about this art form, over other methods. I just like the appearance -- the seemingly simple lines that create the overall image. Thanks for continuing to share your skills and methods.

Hi Kelly. Glad you like it. I'm happy with it myself. I'm not sure that there's much study involved on my part though. More likely a combination of doing a number of versions and also knowing that linocuts work better when they're simple than when they're fussy. I did deliberately keep this one a bit simpler though.

Happy so see your progress on your blog as well.

Thanks Ellen. It's funny but I think that some people just love prints and especially linoleum and wood block prints. While others just don't find much appealing in them. I'm still learning about linocuts, mainly through experience, but one thing I do keep learning is how important the line is. For instance I used a large wood-carving gouge to cut out the line of light on the tree. In the past I might have used smaller gouges and ended up with more a pattern than a large line. In any case it's just one of the many things I keep learning about it. One warning though: if you ever decide to take it up you may find it addictive!