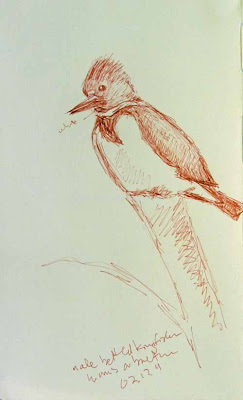 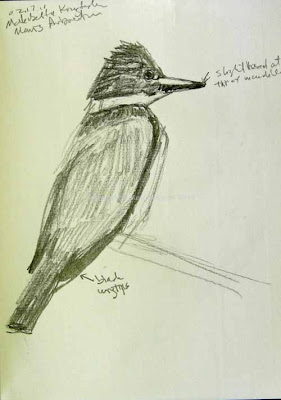 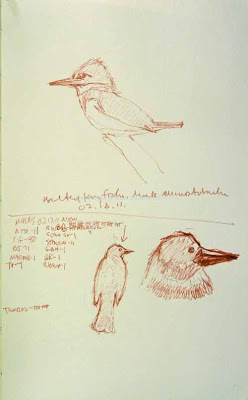 We birded for the Great Backyard Bird Count last year in two feet of snow or more. This year's GBBC starts tomorrow. Instead of two feet of snow though we had temperatures in the mid-60s today. A welcome change but one that can't, and shouldn't, last.

Still I took advantage of it to do some field sketching at Morris Arboretum. Like another trip there last Sunday a male Belted Kingfisher was evident. And he seemed to stay in one place so that I could sketch him through the scope. Normally he just doesn't stay in the same place or pose for long. I wonder if it's possible that there is less food available for him and so he just goes to a few choice spots overlooking the open water waiting to see fish movement. That's just a wild guess. In any case it's been a pleasure to have some chance to draw him.

All of the drawings but one above are done with Pitt Artists Pens. The other Kingfisher is done with a 4B pencil. These are very different media. Normally I like the greater expressiveness, due to fluctuating line weight, that a soft pencil offers. But I've never found myself happy with them when field sketching. Maybe the lines are too loose and inexact. I'm not sure. But for some reason I favor the more inflexible pen line. Out of curiosity today though I did one in pencil. As you may notice one 'bad' side of using a pen is that you can't erase. But that's fine. I know I'll have to live with what I put down so I don't worry it to death. In the case of the massive bill on the Red-winged Blackbird above though you sometimes have to live with some obvious mistakes. 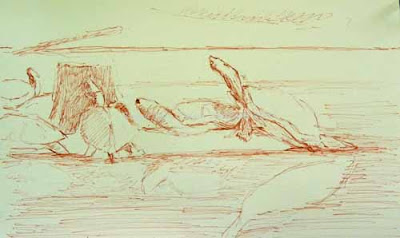 Last Monday I heard my first singing Song Sparrow. Today at Morris I heard more as well as many singing male Red-winged Blackbirds, another first for the season. Along with them I believe the first basking turtles I've seen. Often I tell myself I ought to sketch them. Today was such a beautiful day and I had some free time so I also did a sketch of them. It could use more work. But often live field sketches are like that. You capture what is there and then use that as the basis of something more developed in the studio. I'm sure we haven't seen the last of these kingfishers or turtles.
Posted by Ken Januski at 5:02 PM