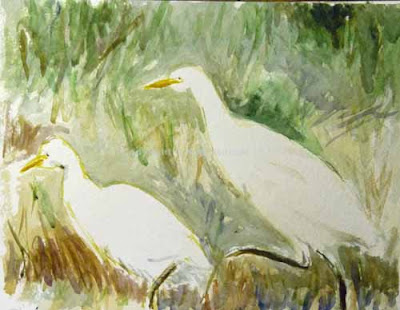 It's hard to believe that spring is showing some signs of appearing once again. I wish I could say that I've seen these signs personally. But I haven't. It's just what I've read. The PA Rare Bird List has included reports of the first singing Tufted Titmice and Song Sparrows. In Delaware I believe I read that a Black-crowned Night Heron had returned. Soon, especially if there's snow, we'll see members of the blackbird family in our backyard, at least for a moment or two. It's about time to see some Common Grackles along with our unwanted guests the Brown-headed Cowbird.

Today I wanted to try a 'flash' painting, an exercise where you do a painting without any pencil sketching in 15 minutes. I decided to use some photos of the first ever Cattle Egrets that we saw in Cape May, NJ last November. The first attempt took 30 minutes so I couldn't really count it. The next one took only 15 but when it was done I felt it was incomplete. So I later went back into it. The results are at top. I probably spent a total of 30-45 minutes on it.

Paintings like this aren't finished. They're just exercises that sometimes also look like paintings. I do like the sense of life that they often have, even if there's little sense of finish.

Cattle Egrets do in fact seem to march, or strut, often leaning backwards a slight bit. They march steadily on, just as I hope spring will continue to do.
Posted by Ken Januski at 10:14 PM